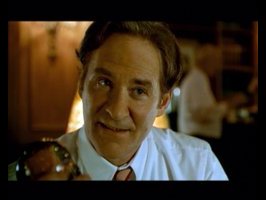 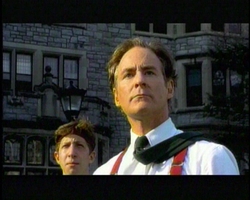 Storyline
William Hundert is a passionate and principled Classics professor who finds his tightly-controlled world shaken and inexorably altered when a new student, Sedgewick Bell, walks into his classroom. What begins as a fierce battle of wills gives way to a close student-teacher relationship, but results in a life lesson for Hundert that will still haunt him a quarter of a century later.

Taglines:
In everyone's life there's that one person who makes all the difference.

While on location at the Emma Willard School in Troy, New York, 'Kevin Kline (I)' stood in as an English teacher for several classes who were studying Shakespeare at the time. Students gave him rave reviews as an instructor.

Continuity:
After Mr. Hundert is startled by the slamming of books in his classroom, some of the chalk marks on the board change several times between shots.

William Hundert:
As I've gotten older, I realize I'm certain of only two things. Days that begin with rowing on a lake are better than days that do not. Second, a man's character is his fate.

I can see exactly why comparisons to Dead Poets' Society abound. Having
attended boarding school and developed an irrational attachment to that
film
at the time, I have since discarded it like an overworn leisure suit, and
tried to move on to more interesting fare. But honestly, this film made
me
think — in all the ways that school should have, and the DPSociety
didn't
even try to.


Robin Williams has never starred in a thinking man's film, which is why,
in
the end, the comparison between the two movies doesn't hold up. To get
The
Emperor's Club, you have to actually grasp why someone might be inspired
by
history — by a time when men could truly fail, or conquer, or establish
a
foothold in eternity. The fact that we know Socrates existed is
astounding.
It is luck. If James Carville goes down in history it will be an
accident,
if a likely one. The point of this film is that difference — the
difference between men whose character demands to be remembered, and men
whose character demands to be forgotten. It is also the story of two
systems of reward and recognition — one that produced Plato and one that
produced Jerry Springer. That is why we study history, as the movie
says.
To learn from and be inspired by the great leaders who came before us,
and
to overcome the moral mediocrity of the modern world.

But, as the film concludes, great men are no longer chosen to lead. The
Emperor's Club, while cloaked in the guise of a charming elitist flick,
is
actually a tale of profound disappointment and disillusionment regarding
human society. The few great men who are left exist in the shadows,
while
the ignorant grandstanders wield political power. We elect them; we are
in
their hands. And it is all because of a lack of awareness, a lack of
knowledge, and a lack of history. People don't vote for principle —
they
vote for rhetoric. And it shows.

I was not expecting too much from this movie, other than the always
pleasurable experience of watching Kevin Kline. But, wrapped up in the
sentimental moralizing, there was the story of a great man doing the only
great thing left: trying to bring others out the darkness. His success
or
failure is as immaterial as the execution of Socrates — it really is the
thought that counts.