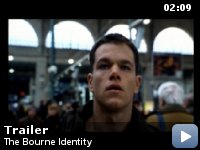 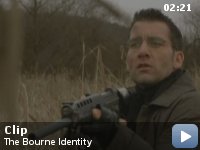 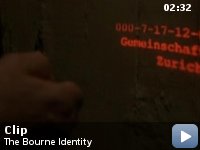 A man is picked up by a fishing boat, bullet-riddled and without memory, then races to elude assassins and recover from amnesia.

Storyline
Based very loosely on Robert Ludlum's novel, the Bourne Identity is the story of a man whose wounded body is discovered by fishermen who nurse him back to health. He can remember nothing and begins to try to rebuild his memory based on clues such as the Swiss bank account, the number of which, is implanted in his hip. He soon realizes that he is being hunted and takes off with Marie on a search to find out who he is and why he is being hunted.

Taglines:
He was the perfect weapon until he became the target.

Continuity:
When Bourne is on the fire escape at the consulate and he drops the red bag, there is a car parked beside the building. In the next shot, we only see the bag. The car has vanished. Then as he swings onto the ledge, the car is back. Then as he climbs down the wall, the car has disappeared.

Conklin:
Great police work, really brilliant! Why don't they just put up a sign that says "Don't come back!"

I have grown extremely tired of the typical formula spy film like Bond, or
the juvenile stunt exhibition "Triple X." There have been a bare handful
of
spy films that feature relatively realistic spy thrillers, especially
recently with a concentration on spectacular movies that have less
substance
than cotton candy.


Besides "The Bourne Identity," "Ronin" is the only other recent spy movie
I
can think of that didn't feature skydiving, bungie jumping, skiing
downhill
while shooting innumerable bad guys, laser pens, cars with ejection seats,
or silicone breasted women with names you'd be vaguely embarrassed to say
in
front of your mother. Most of the crap that passes for an espionage film
has
no plot or reason for existing other than to meet a quota of explosions
and
cleavage in order to draw the summer action film crowd.

While "Bourne" does not have a particularly deep plot, it is consistent
and
focused. The focus is entirely upon Bourne and how he is to deal with
having
no memory of his past, being hunted without knowing why. Some people have
complained about being confused by the movie. I for one, do not need to
have
everything spelled out since in many cases this smacks of unreality in the
first place; the essence of espionage is drawing conclusions from very
sketchy information. If you can't handle a little of that, you probably
should stick to Disney films or TV's Scooby Doo where everything is
explained in the end. We never find out about what is in the case in
"Ronin"
and I can live without some information being filled in about Bourne's
past.

To those who have moaned about the incompatibility of the book and the
movie, seek help. There are probably several things that work in the book
that would either be boring and take too much screen time to explain, or
would be viewed as cliche to modern screen audiences. As I remember, I
liked
the book, and I definitely like this movie. I view any movie adaptation as
an interpretation of the book rather than a translation from words to
pictures anyway.

As for realism, most of the action scenes are believable, no super-gadgets
are to be seen, no incredibly lovely models fall madly in bed with Bourne,
and the hero shows definite signs of physical vulnerability despite a very
high level of training and competance. As someone who has trained in
martial
arts for over 10 years, unrealistic fight scenes are a pet peeve. The
fights
in "Bourne" are fast, nasty, and very realistic while still being
entertaining for the layman. (And yes, taking a gun away from some idiot
who
is standing well within your striking radius without getting shot is
definitely doable, though I had serious doubts until we tested it for
ourselves with plastic dart guns in the dojo several years
ago).

While not being perfect, "The Bourne Identity" is, simply put, several
grades above the typical spy film. Being focused on an individual level
rather than involving itself huge political ramifications lends it another
layer of respectability rather than detracting from it as some comments
have
implied since it remains a human problem on a comprehensible scale. The
mysteries that are left are bigger mysteries for Bourne than us, and I
think
should be viewed as intentional omissions rather than loose ends. The
implausibilities are kept to a minimum and the realism to as high a level
as
possible while still being spectacular enough to meet the expectations of
the genre.