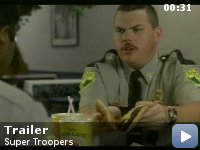 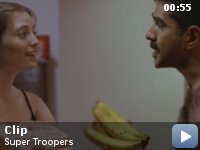 Five Vermont state troopers, avid pranksters with a knack for screwing up, try to save their jobs and out-do the local police department by solving a crime.

Storyline
Thorny, Mac, Rabbit, Foster and Farva are Vermont state troopers out to have a good time. Stationed in a remote area near the Canadian border, the troopers, avid pranksters with an affinity for syrup, have a knack for screwing up on the job. But when budget cuts in the town of Spurbury threaten their livelihood and pit them against arch-rival Spurbury P.D., the five friends try to straighten up and fly right. That is, until a dead body is discovered and a possible drug ring is unearthed. The super troopers spring into action attempting to solve the crime, save their jobs, and outdo the local police department.

Taglines:
It's their highway. You're just driving on it.

In the first scene that was filmed with Brian Cox (the scene on his porch, where he is reading the letter from the governor), the letter was supposed to have the lines typed out on them. Broken Lizard didn't know that when they started the scene, so they typed the lines up quickly and gave it back to him. If you look closely you can see some white out marks from what the letter originally said.

Continuity:
In the syrup-chugging scene, three empty, open syrup bottles are on the table. Mac then throws one of the bottles at Officer Rando. The shot pans back over to Mac at the table, where the syrup bottles have caps.

College Boy 2:
No, man, I'm just saying… I'm sayin', if-if you own beachfront property, right, do you own, like, the sand and the water?

One of the best comedies ever.


Not many movies keep on getting better and better as you watch them for
the 5th, 6th or 7th time, especially comedies. The first time I saw
this movie in the Cinema it didn't blow me away, and most people I know
who have seen this movie only once do not rate it very highly. After
seeing it a few times I rate this movie as high as Fletch and other
classic comedies, probably higher.


There is so many worthwhile jokes that I think it must have taken quite
a while to write – if you don't have a similar sense of humour you
would probably think they had written it all in one night which clearly
wasn't the case. There is not a lot to complain about with respect to
the acting either – their style suits the movie perfectly.

Remember that it is a comedy first and foremost – if you are looking
for an clever story you have the wrong genre. Criticism of the movie
being a series of sketches or jokes is really irrelevant – one look at
the cover or preview tells you exactly what kind of movie it is.
Regardless, there is nothing wrong with the plot and if you
appreciate/comprehend the jokes the movie flows just fine.