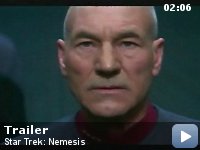 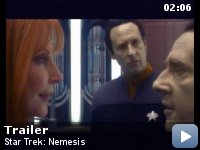 After the Enterprise is diverted to the Romulan planet of Romulus, supposedly because they want to negotiate a truce, the Federation soon find out the Romulans are planning an attack on Earth.

Storyline
On their way to Riker's and Troi's honeymoon, the Enterprise is sent near the Neutral Zone to Romulan space, and picks up a prototypic twin of android Data. Immediately, they are further sent to Romulus, where a new Praetor, Shinzon, a human cloned from Captain Picard who lives on the slave planet Remus, appears to want peace with the Federation. But then the crew detects a break-in on their computer systems, and Picard is captured by the Remans because Shinzon needs him as his only matching supplier of genetic material. Picard and the Enterprise can escape, only to find themselves battling Shinzon's completely cloaked Warbird, who is after the complete destruction of Earth.

Denise Crosby discussed with executive producer Rick Berman the possibility of using her
Star Trek: The Next Generation character Sela in the film, but they could not work out a way to properly fit the character into the movie.

Senator:
Senators, consider the opportunities for the Empire. At last, the destinies of the planets Romulus and Remus will be united. Shinzon of Remus is offering us a chance to make ourselves stronger than ever before. It would be madness to reject it. I beg you not to let prejudice or politics interfere with this Alliance. By joining Shinzon's forces with ours, not even the Federation will be able to stand in our way.

It's a shame that "Star Trek" is having a tough time surviving in a market
that's glutted with bigger budget, "sexier" stuff like The Matrix, Lord of
the Rings, Harry Potter…

Compared to those blockbusters, Nemesis appears almost quaint, with its
heavy reliance on computer graphics that were state of the art – several
years ago. Paramount simply isn't investing enough money in these films to
keep them looking up-to-date, which is a shame, because Star Trek still has
plenty of relevant things to say.

Or does it? You could look at Nemesis as a triumphant return to form,
filled with all the action and humanism we've come to expect from these
films, or you could look at it as a clumsy rehash of plot elements from "The
Wrath of Khan" (revenge! space fight! dramatic death!) and "The Undiscovered
Country" (peace with our moral enemies!). I have trouble deciding if this
movie is good enough to justify continuing the franchise; I've got nostalgic
feelings for the Next Gen crew, even though I prefer the originals, and
maybe those feelings are acting in the same capacity as beer
goggles.

So what works? Stewart, Frakes, Spiner. The battle is fun. Some of the
"deep" questions raised about identity, cloning, and nature vs. nurture got
me thinking (although, in the end, they were largely irrelevant – the whole
thing devolves into a fight!). What doesn't work? Stilted dialogue.
Techno-babble. Boring sets (particularly for the Enterprise). Trying to
pass off California filmed through a filter as an alien planet.

Final verdict? First, Star Trek needs a rest. Then, it needs more money.
That's what happened to Doctor Who in the last decade, and Godzilla and
James Bond went through similar trials in the 1980s. It's bound to happen
to any long-running franchise. When it comes back, it does need to be
better than Nemesis, not because Nemesis is terrible, but because it's a bit
tired. New creative blood revitalized the original crew's films – Nicholas
Meyer and Harve Bennet, who knew nothing of Star Trek, managed to give the
series the jolt it needed to remain popular for a decade. Another dose of
outsiders, with outside perspectives, will be needed to get Star Trek up and
running again, sometime in the future…

TagsUSA
Infernal Affairs
The Lord of the Rings: The Two Towers