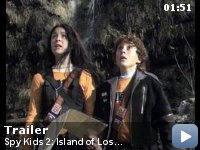 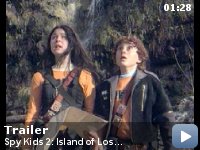 The Cortez siblings set out for a mysterious island, where they encounter a genetic scientist and a set of rival spy kids.

Storyline
Exploring the further adventures of Carmen and Juni Cortez, who have now joined the family spy business as Level 2 OSS agents. Their new mission is to save the world from a mad scientist living on a volcanic island populated by an imaginative menagerie of creatures. On this bizarre island, none of the Cortez's gadgets work and they must rely on their wits–and each other–to survive and save the day.

President of the USA

Factual errors:
Carmen calls for "rebreathers" in the Drangonfly sub. However, when she and Juni are swimming, they release bubbles associated with standard scuba respirators. Rebreathers recycle much of the gases in the system, reducing or virtually eliminating bubbles.

Gary Giggles:
Excuse me there, sport.

After enjoying some success with the surprisingly enjoyable & cheesy "Spy
Kids," Director (and all around good guy) Robert Rodriguez now brings forth
a sequel, "Spy Kids 2: The Island of Lost Dreams" which is far less
enjoyable and far more cheesy. As a matter of fact, you'd be hard pressed
to find more cheese anywhere outside of a Wisconsin dairy
farm.


Juni and Carmen Cortez (Daryl Sabara and Alexa Vega) are back, now
officially a part of OSS, and officially recognized as Spy Kids. But the
OSS, just like every other government bureaucracy, cannot resist expanding
upon a good thing, so now there is an entire army of "spy kids" at their
disposal; but Juni and Carmen are, of course, the most renowned.

Within in the first opening minutes of the film, which takes place in a
truly inspired theme park, we quickly discern that Juni and Carmen have
rivals: the Giggle kids (Matthew O'Leary and Emily Osment) who dearly covet
the Cortez' fame and status. With help of their conniving father (Mike
Judge), the Giggles do what they can, not only to surpass the Cortez family,
but to humiliate them as well.

Once again, we find the greatest threat to the OSS is the OSS itself, along
with the internal politics and treachery which played a small but
significant part in the plot of the first film. It seems as if the OSS is
more of a threat to world peace than a help, and one wonders why Uncle Sam
doesn't just shut the operation down and call it a day. Perhaps it would
prevent the making of any more "Spy Kids" movies, which I'm beginning to
think would be a very good thing.

The plot revolves around a device known as a "transmooker" — which can be
best described as the ultimate cloaking device, even able to cloak entire
islands off the map. It also has the wonderful ability to render all
electronic devices useless, which is quite a thorn in the side of the
intrepid Spy Kids, who's reliance on James Bond style fancy gadgets is only
a shade less than an alcoholic's dependence on his next drink. Of course
the transmooker itself is an electronic device, but somehow is immune to its
own nasty effects. (Only in Hollywood….)

So our two heroes, Juni and Carmen, locate the cloaked island, where the
stolen transmooker was taken, and attempt to find it before their rivals,
the Giggles kids, do. The island turns out to be a retirement resort for
every single monstrous creature ever created by Ray Harryhausen ("Jason and
the Argonauts," "7th Voyage of Sinbad," etc.). Except we are told that they
were created by the socially insecure and somewhat troubled scientist "Dr.
Romero" (Steve Buscemi) who was looking for some companionship, and a
portable zoo. But of course those of us who've seen a few movies in our
time know better.

During the same time, there is a completely boring and totally unnecessary
sub-plot involving Carmen & Juni's parents and grandparents. The only
reason the subplot exists is to cloak this poor homage to Harryhausen as a
"family film." Yeah, right. I certainly fell for it.

Hollywood films, especially action-adventures and sci-fi flicks, often ask
the audience to suspend logic and rational thought while the plot thickens.
It is the price we pay, beyond the ticket price, for the pleasure of being
"entertained." But Spy Kids 2 doesn't just ask for a suspension of belief,
but a wholesale slaughter of anything remotely resembling intelligence.
That's a big price to pay, and one I was unable to justify.

If Daniel Rodriguiez is such a fan of Harryhausen, then he should make "The
8th Voyage of Sinbad" or some such thing, rather than trying to find a way
to incorporate Ray's creatures into a movie allegedly about espionage. The
CGI recreations of Harryhausen's monsters was one of the more enjoyable
aspects of this horrid film, but not enough to pull it out of the slimy pit
in which very poor writing knocks it into.

The dialogue is stupid, even for kids to listen to. Most of the jokes fall
as flat as the acting. Much of the cuteness and fun of the first Spy Kids
film is completely lacking in the sequel. Instead, we have a very
disjointed plot, an adventure that leads to nowhere, and a subplot that
should have been locked in the submarine where it mostly takes place.