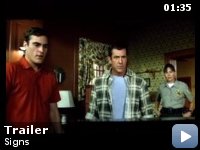 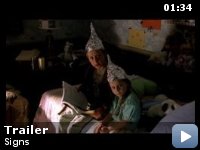 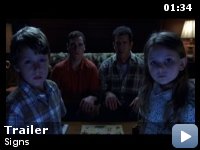 A family living on a farm finds mysterious crop circles in their fields which suggests something more frightening to come.

Storyline
In Bucks County, Pennsylvania, a five-hundred-foot crop circle is found on the farm of Graham Hess, the town's reverend. The circles cause a media frenzy and test Hess's faith as he journeys to find out the truth behind the crop circles.

Taglines:
A message. A warning. A sign…of things to come.

The "Brazilian Video" scene was actually shot in Miami, but the children were all Brazilians. A Portuguese couple was also brought to play their parents, but Shyamalan decided not use them because he noticed that their accent was totally different.

Factual errors:
The pizza place they eat at when the go to "town" in reality does not actually serve pizza but makes take home pizza kits that you cook yourself. However, the store is fictionalized so that it does serve pizza for the movie.

Morgan:
[to Bo]
Everything people have written about in science books is going to change…

Off-Screen TV Anchor:
[about 45 seconds later]
Everything they wrote in science books is about to change.

Morgan:
I told you.

What was the guy on who invented this ridiculous story??? ***Spoiler Alert***

OK, this movie has a good cinematography and one cannot argue about the
good
craftsmanship.

However, who invented this ridiculous story???

Let me get this right:

a) Aliens can travel millions of light years in their space crafts, but
lack
the technology of breaking into a wooden house.
b) For that matter – a seven-foot-tall alien, who can run like an Olympic
athlete, can be locked into a wooden kitchen pantry without being able to
escape.
c) Aliens (able to travel space) run around naked and cannot deal with
water. Does this imply that a raincoat is a more sophisticated invention
than a spaceship?
d) Aliens come to `harvest human beings', but can be scared off by wooden
clubs. Aehhh . the human body consists 90+% of water, which the aliens
cannot handle . does this qualify for the `real dumb plot
award'???
e) A referent looses his faith when his wife dies (which is fair), but
regains it when he remembers her last words which tip him off that Aliens
doesn't like being beaten with wooden clubs . are there more people who
think this is crap???

f) When confronted with an imminent Alien attack, board yourself into a
lonely wooden house in the prairie – don't go into the next town, arm
yourself and join the local militia / military organisation.

g) Don't have the asthma medicine your son's life is depending on
handy.
h) After you boarded up your house, just hang around in the lounge. Don't
fortify your cellar basement and shift all your water, food and medicine
there.
i) Lacking fire arms, don't arm yourself with knifes, axes or whatever you
can find. Leave your vicious guard dogs (who detect aliens earlier than
you
and could scare them off) outside the house.

My opinion – right down there with `Battlefield Earth' and `Giggli'. 1 out
of 10.