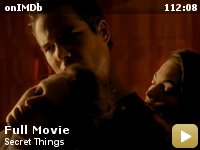 Storyline
Two young women find themselves struggling to survive in Paris, street-wise Nathalie, a stripper, and naïve Sandrine, a barmaid. Together, they discover that sex can be used to their advantage, and pleasure. Both find positions in the office of a large bank, where bored, under-stimulated, prey are easy pickings. After making their way though several layers of executives at the bank, with destructive, and lucrative, results, they approach Christophe, scion to the bank director. What they don't know is that Christophe is a manipulative voyeur, whose last two lovers set themselves on fire when he rejected them. A connoisseur of high-class orgies, Christophe is only interested in new talent to satisfy the appetites of all whom he controls. In Christophe, the girls have found an opponent who knows all their wiles, and will challenge their simple under-class friendship with levels of jealousy and ecstasy that they have never experienced before. Will they survive?

Taglines:
The delectably twisted fable centers on two penniless but shapely young women who set out to better their social station by manipulating men.

Anachronisms:
The end of the movie is supposed to take place after Nathalie is released from prison, several years after the main plot takes place. Yet the movies advertised on the advertisement pillar in the background (
See Spot Run,
Town & Country) were released in France around the same weeks as the movies referenced in the main plot's time frame (
Sleepwalker etc.).

Sandrine:
What do you feel dancing naked with all those people watching?

Sandrine:
But you excite them.

Nathalie:
On stage once, I came the hardest I ever had.

Sandrine:
Even with a guy?

Nathalie:
That night I came the hardest I ever had.

Nathalie:
Because people were watching.
[…]

The opening scene in Secret Things slams you with its voyeuristic impact
suggesting that this is a soft-porn exploitation in someone's private
bedroom; however, the scene turns out to be an autoerotic exhibition
onstage
in a bar in Paris. Nathalie (Coralie Revel) is a gorgeous exotic dancer
headlining in a dank bar in Paris. She is fired after a tiff with the
calloused owner together with a naïve bartender Sandrine (Sabrina
Seyvecou).
The two ladies vow not to be used by men again. Nathalie encourages
Sandrine to loosen her sexual inhibitions to get more out of life. She
instructs Sandrine how to awaken her sexuality both in the bedroom and at
public places such as a tunnel in the Metro. The pair decides to room
together and scheme on how they will better their lot in life by using men
to climb the ladder of success and become free spirits.


After the ladies land a job at the same firm, they plot on how to advance
their positions using their sensuality as a manipulative tool. Nathalie
quickly maneuvers a job as personnel assistant and Sandrina is now an
executive secretary. Sandrina, currently an apt pupil in sexual prowess,
manages to manipulate her superiors until she finally lands a position as
secretary to the main supervisor. This formerly monogamous married man,
who
is twice Sandrine's age, falls madly in love with her to his detriment as
they secretly hump their way across the screen both on the job and at
other
more acceptable venues. Sandrine flagrantly uses him to advance her
career,
yet plans on dumping him once she conquers the young CEO, a handsome and
clever womanizer.

As the affair with her boss hardens, she begins to back off and he becomes
more desperate to possess her. Nathalie on the other hand has fallen hard
for an unrevealed lover, who apparently has dumped her. Sandrine attempts
to console Nathalie and ultimately winds up in the sack with her. Now the
plot begins to deteriorate as the newfound freedom they were both
relishing
begins to erode. Trapped by the amorous attention of her boss, Sandrine
now
imposes upon him to promote Nathalie to their office where they eventually
indulge in a ménage à trois. This scenario further crumbles when the
three
are discovered in hot embrace in the restroom by the young stud of a CEO,
who is even more Machiavellian than they are.

The first three quarters of the film are fun and interesting as we observe
the women taking charge of their lives and maneuvering through office
politics. The movie eventually falls apart dropping to the level of a
soft-core porn movie, without rhyme or reason until the plot regresses to
something secondary to the sexploitations. The director, Jean-Claude
Brisseau presents quite a banquet of sexuality, turning on both men and
women audiences throughout the film, while maintaining a nice balance of
story and visual indulgence. This picture, in French with English
subtitles, is deftly crafted so that you easily forget that you are
reading
everything instead of listening to the dialogue. Nathalie is so stunning
and sexual on the screen that it is by itself well worth the price of
admission. It is too bad the story falls apart in the third act;
nevertheless, I would still recommend it for its visual arousing energy
and
remarkable premise.