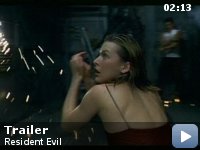 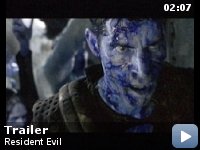 A special military unit fights a powerful, out-of-control supercomputer and hundreds of scientists who have mutated into flesh-eating creatures after a laboratory accident.

Storyline
A virus has escaped in a secret facility called "The Hive," turning the staff into hungry zombies and releasing the mutated Lab "Animals" that they were studying. The complex computer shuts down the base to prevent infection. The parent corporation sends in an elite military unit, where they meet Alice, who is suffering from amnesia due to exposure to nerve gas. The military team must shut down the computer and get out, fighting their way past zombies, mutants, and the computer itself, before the virus escapes and infects the rest of the world. Alice must also come to terms with her slowly-returning memories.

Taglines:
A secret experiment. A deadly virus. A fatal mistake.

Much of it was filmed in unfinished stations of Berlin underground.

Factual errors:
When Matt kneels down to examine the blood of the undead Hive worker, he claims that blood only coagulates when you're dead. In truth, coagulation is simply the process of blood clotting around a damaged vessel wall, which indeed happens in living beings. On the contrary, in death, blood doesn't coagulate, but separates, causing livor mortis.

Red Queen:
I implore you.


I had to sift long and deep for a good comment on this. Why all the
hostility? I think there was great chemistry on this production and it
shows; the actors and crew involved loved the game and had a good time
making this. This movie successfully recreated the feel of the game,
and because it kept exposition to a minimum of what you needed to know
for this particular story and didn't borrow from or revise any of the
original characters or settings, it supported and strengthened the
franchise. No story is retold here, no words are wasted, the setting,
feel and pace is familiar to fans of Resident Evil and yet it's
perfectly accessible to those unfamiliar with the broader storyline.
Not giving the fan-boys their favorite characters was a good choice
since characters tend to get mangled in adaptation, and yet the
fan-boys still complain. With this film you have a good, watchable
story that can partake of the Resident Evil cosmology, showing it due
respect.


It did an excellent job establishing characters without too much
unnecessary background, developing them just enough to make you want to
know what they'll do next, to make you care before the sudden and
gruesome happens to them. The acting was above par for a Resident Evil,
certainly much better than the first game. The plot was no more comic
bookish than any of the games. My one complaint was that the characters
were too battle-trained, too slick, too good at fighting for them to be
sympathetic horror subjects. This could've been balanced out with more
reaction shots showing the soldiers wetting themselves. But Alice's
over-the-top commando-style action made her too much of a super heroine
to really make anyone concerned about her survival; characters made of
Teflon make good action but apathetic horror subjects.