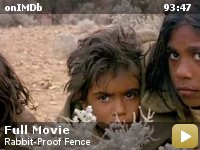 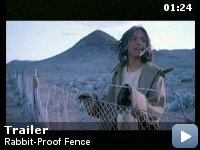 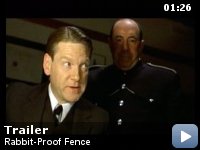 In 1931, three aboriginal girls escape after being plucked from their homes to be trained as domestic staff and set off on a trek across the Outback.

Storyline
Western Australia, 1931. Government policy includes taking half-caste children from their Aboriginal mothers and sending them a thousand miles away to what amounts to indentured servitude, "to save them from themselves." Molly, Daisy, and Grace (two sisters and a cousin who are 14, 10, and 8) arrive at their Gulag and promptly escape, under Molly's lead. For days they walk north, following a fence that keeps rabbits from settlements, eluding a native tracker and the regional constabulary. Their pursuers take orders from the government's "chief protector of Aborigines," A.O. Neville, blinded by Anglo-Christian certainty, evolutionary world view and conventional wisdom. Can the girls survive?

Taglines:
The True Story of a Family That Defied a Nation.

The last scene in the movie, which shows the real-life Molly Craig walking with a walking stick, was shot first. According to Phillip Noyce, during an interview after a screening, Molly's age and health made it so that it would be best if that scene was shot first.

Continuity:
When Moodoo is first seen riding north along the Rabbit-Proof Fence to meet a police constable he's on the west of the fence. Shortly before the actual meeting he's on the east side of the fence.

Title Cards:
For 100 years the Aboriginal Peoples have resisted the invasion of their lands by white settlers.

Title Cards:
Now, a special law, the Aborigines Act, controls their lives in every detail.

Title Cards:
Mr. A. O. Neville, the Chief Protector of Aborigines, is the legal guardian of every Aborigine in the State of Western Australia.

Title Cards:
He has the power "to remove any half-caste child" from their family, from anywhere within the state.

This is a very powerful film from the wonderful Phillip Noyce (The Quiet
American) and its based on the shameful history in Australia where aborigine
children were taken by force from their families and tribes to camps and
taught to be servants. In the film 3 sisters escape and venture to walk
1,500 miles back to their tribe. The title refers to a fenceline that
stretches for thousands of miles and the girls follow it. The wonderful
aborigine actor David Gulpilil (Walkabout) plays a scout that is tracking
the girls and Kenneth Branaugh plays an officer that is in charge of the
whole operation. I guess the main flaw in the film would be the middle where
most of the walking takes place and the film really slows down but its not a
major complaint. The 1,500 mile trek is expertly paced and the film is by no
means dull. Rather, its fascinating! The real footage that we see at the end
of the film is so powerful that the whole essence of what you have just
watched becomes even more devastating. This is more than just an important
film, its a documentation of an ugly and shameful part of Australian
history. A must see!