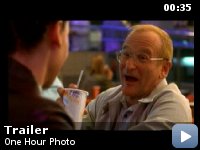 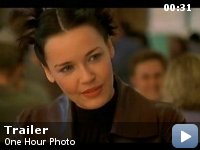 An employee of a one-hour photo lab becomes obsessed with a young suburban family.

Storyline
Middle aged Sy Parrish works as a technician at a one hour photo lab located in a SavMart store in a suburban mall. Sy is a lonely man, never having had any friends. He knows much about his customers through the photographs they have developed. But he knows more about the Yorkin family – specifically Nina Yorkin and her adolescent son Jake Yorkin, the two in the family who drop off and pick up the family's photofinishing – than anyone else, the family about who he is obsessed. Nina's husband, Will Yorkin, is incidental to his obsession since Sy has only seen him in photographs. Sy's obsession includes fantasizing about being their favorite "Uncle Sy". He has even been making an extra set of prints for himself of all of their photographs since Jake was a newborn. After an incident at work and after Sy finds out more about the family through a set of photographs, he decides to right the injustices he sees in the only way he knows how…

Taglines:
The things that we fear the most have already happened to us…

Robin Williams often plays practical jokes in the middle of a take during the making of a film. According to producer Christine Vachon, Williams burst out of a doorway completely nude during one take for a chase scene.

Continuity:
When Sy is sitting in Mr. Owen's office, the position of his hands instantaneously change between camera angles. At first his right hand is rested on his left forearm, than instantly switches to his fingers being interlaced, than back to the previous position.

Detective James Van Der Zee:
[Sy sits alone handcuffed in a sterile police interrogation room, door buzzes and Van Der Zee walks in]
We processed the roll of film we found in your bag, Mr. Parrish. They're not very pretty pictures. Also, you left the camera in the hotel. We processed that roll as well.

Sy Parrish:
Can I see them?

Sy Parrish:
Do you guys have your own lab or do you have to send it out?

Detective James Van Der Zee:
We have a lab.
[pauses]

Detective James Van Der Zee:
Your legal aide should be here within 30 minutes or so. Now you understand you don't have to talk to me until she gets here if you don't want to. You know that, Sy?
[Sy nods and affirms]

Detective James Van Der Zee:
Good. Sy, can I ask you one question?

subtle but chilling portrayal of madness

Robin Williams gives what may well be the performance of his career in `One
Hour Photo,' a creepy psychological thriller written and directed with cool
precision by Mark Romanek. Given its premise, the film could easily have
degenerated into a sordid, exploitative tale of obsession and madness.
Instead, Romanek has chosen to take a more subtle approach, fashioning a
film that downplays the potential violence of its material while, at the
same time, recognizing the humanity of its central figure.


Romanek understands that the greatest threats to our safety and lives often
come from the gray, nondescript people who surround us unnoticed, the
`nobodies' whose benign faces and vacuous smiles reveal no trace of the
insanity, evil and potential for doing us harm that may be lurking right
there under the surface. And nobody is `grayer' than Si Parrish, an
innocuous, socially undeveloped milquetoast who spends his days working as a
photo developer in one of those sterile five-and-dime drug stores (just like
the one in `The Good Girl') – and his nights sitting all alone in his drab
apartment brooding over a massive family-photo shrine he has erected to the
Yorkins, a seemingly happy family of three whose pictures Si has been
developing, copying and obsessing over for more than seven years now. The
film centers around Si's growing fixation with this one family and his
delusional belief that he too could somehow become an integral part of their
family unit. Then comes the day when Si realizes that he is no longer
content to be a mere vicarious member of this adopted family and, thus,
begins his plan to gradually insinuate himself more and more directly into
their lives.

As both writer and director, Romanek manages to keep us in a state of vague
uneasiness throughout. We are always anticipating some potentially dreadful
event, yet Romanek doesn't go for the easy thrill or the obvious plot turn.
Thanks to Williams' subtle, incisive performance, we come to understand
something of what makes this strange character tick. We begin to sense the
deep-seated loneliness and social awkwardness that have come to play such an
important part in defining both his behavior and his character. Si is
scary, but he is also pathetic. He may have slipped over the edge into
madness, but it is a pathology rooted in overwhelming loneliness and the
inability to `fit in' to the societal `norm' of marriage and family. Even
when his character is at his most threatening and irrational, Williams
somehow makes us care about him.

Romanek hits upon a few ancillary themes as well. He acknowledges how
photos create the appearance of a life without necessarily reflecting the
reality of that life. Most people, Si confesses, record only the `special,
happy' moments of their lives – birthdays, weddings, holidays etc. and leave
out the mundane or painful ones. Moreover, Si tells us that people use
pictures as a way of defeating aging and time, of saying to the world of the
future that `I', this seemingly insignificant person, was really here, being
happy and enjoying life. To match this theme, Romanek's visual style often
feels like the director's own personal homage to The Photograph, as the
camera scans caressingly across a sea of snapshots – and Si's voiceover
narration complements that feeling.

`One Hour Photo' is not a film for those who like their chills heavily laced
with bloodshed, murder and mayhem. It is, rather, for those who can
appreciate a quietly unsettling, yet strangely compassionate glimpse into
the dark recesses of the troubled mind.