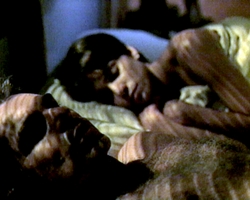 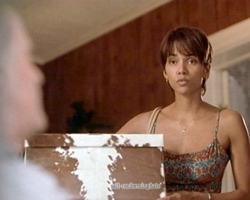 After a family tragedy, a racist prison guard reexamines his attitudes while falling in love with the African American wife of the last prisoner he executed.

Storyline
Set in the Southern United States, 'Monster's Ball' is a tale of a racist white man, Hank, who falls in love with a black woman named Leticia. Ironically Hank is a prison guard working on Death Row who executed Leticia's husband. Hank and Leticia's interracial affair leads to confusion and new ideas for the two unlikely lovers.

Taglines:
A lifetime of change can happen in a single moment.

Wes Bentley turned down the role of Sonny Grotowski.

Continuity:
When Leticia is working in the diner she puts the glass top back on the cake stand twice.

Hank Grotowski:
What's that? Some kinda… some kinda annual… school annual or something?"

Independent filmmaking is alive and well and evident in Monster's Ball.
This film had a minuscule $4 million budget, a terrific script and a
director not afraid to take some risks. Billy Bob Thornton and Halle Berry
practically donated their time they were paid so little. The result is a
powerful and disturbing film that walked off with a boatload of awards, not
the least of which was a best actress Oscar for Berry.


Director Marc Forster conjures a forceful presentation with stark sets, next
to nothing in the way of props and other set decoration, and a non existent
soundtrack. Forster does it with innovative use of the camera, sharp
editing and most importantly excellent actor direction. Forster could have
done better at character development and the ending is nebulous and
unsatisfying, but these shortcomings can be partially forgiven for the films
many assets.

This is an actors' showcase, with outstanding performances all around.
Heath Ledger makes a short but intense appearance as the son that Hank
(Billy Bob Thornton) despises. Ledger pumps the character full of repressed
anger and disappointment, simultaneously resenting him and seeking his
father's approval. Peter Boyle is despicable as Hank's bigoted and self
centered father. Billy Bob Thornton delivers his best performance since
`Sling Blade' with a complex character torn between his prejudices and his
attraction to Leticia (Halle Berry).

Of course the big story here is Halle Berry. Berry shows once again that
she is not just another pretty face. I first took serious notice of her
after seeing her performance in `Introducing Dorothy Dandridge', a little
seen TV movie in which she won both a Golden Globe and an Emmy. After that
marvelous dramatic performance, I was surprised that she couldn't land roles
any better than `Swordfish' and `X-Men', which tapped nothing more
substantial than her looks.

In this film, Berry is sexy and alluring, but these are only incidental
attributes. She displays a full range of emotions from vibrant elation and
unbridled passion, to utter despondency. She practically rips her heart out
and throws it at the camera. She can convey volumes with a single look, or
come completely unglued with equal impact. Her Oscar for this performance
was richly deserved and had nothing to do with her race as so many have
rationalized. She just flat out won it going away. As good as Nicole
Kidman was in `Moulin Rouge', it wasn't even close.

This is an excellent film that is worth seeing for the acting alone. I
rated it a 9/10. It is a compelling and deeply disturbing drama that
serious film lovers will surely enjoy.