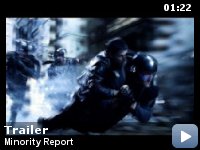 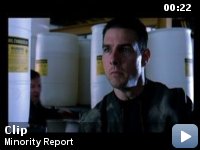 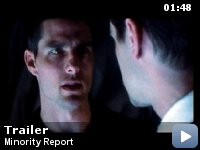 In a future where a special police unit is able to arrest murderers before they commit their crimes, an officer from that unit is himself accused of a future murder.

Storyline
In the year 2054 A.D. crime is virtually eliminated from Washington D.C. thanks to an elite law enforcing squad "Precrime". They use three gifted humans (called "Pre-Cogs") with special powers to see into the future and predict crimes beforehand. John Anderton heads Precrime and believes the system's flawlessness steadfastly. However one day the Pre-Cogs predict that Anderton will commit a murder himself in the next 36 hours. Worse, Anderton doesn't even know the victim. He decides to get to the mystery's core by finding out the 'minority report' which means the prediction of the female Pre-Cog Agatha that "might" tell a different story and prove Anderton innocent.

Taglines:
You can't hide. Get ready to run!

At the police station, the officers talk about the metaphysical proof of precognition. Chief Anderton (Tom Cruise) rolls a red ball along a table to demonstrate the law of cause and effect to Det. Witwer (Colin Farrell). All of this is an allusion to the famous claim of philosopher David Hume (1711-1776), that by observing billiard balls you can actually demonstrate that cause and effect does not exist but is merely a habitually created fiction of the mind.

Continuity:
When the robots are looking for Anderton to scan his eye, he grabs a small cooler of ice and throws it into the bathtub to get in and hide. The next time the camera shows the tub, there is nearly 10 times as much ice in the tub.

Lara Anderton:
How do you take your coffee?

Lara Anderton:
I don't have any cream, sorry.

Danny Witwer:
Just sugar, then. You and John ever come here?

Lara Anderton:
[begins to walk away towards the kitchen]
We used to.

Danny Witwer:
He's not here now is he?

Lara Anderton:
[stops in the doorway and looks at him]

Danny Witwer:
I had to ask.

Lara Anderton:
[walks back to Danny and hands back his cup]
I don't have any sugar, either.

What must film makers do? This was GOOD – believe nothing else.

I think some people just write reviews for sites like this because they like
to complain. I actually find myself wondering if all the gripers here have
actually seen Minority Report, as I just have, because I have to say that is
one of the most gripping and involving movies I have seen in quite a while.

The content is amazing – all the little details that put the audience
firmly in the middle of the 21st century. Personally I can absolutely
believe that technology will have advanced in the kind of ways portrayed in
the film within 50 years. Just look back 50 years into the past and you
should be able to see why. The lives of everyday people in the film, where
they are scanned and advertised 'at' all day every day, apart from an excuse
for product placement (and why not?), certainly make you think about a world
where 'they' know your every move (a future towards which we are already
hurtling with some speed).

The style is amazing – why the wooden balls? Because they're cool is why. I
like to think that as we progress as a civilization we will keep a few such
elegant idiosyncrasies knocking around. The plastic, chrome and glass sets,
objects and architecture all looked clean and functional and the way that
they suck the color out of a scene worked well and gave the film a
distinctive palette. The cars are the best looking vehicles I have ever seen
in a film. I have only one criticism here – why do all the computer displays
look like Macs? Surely a touch unrealistic 😉

The story is amazing – complicated, yes, but also engrossing, exciting and
scary. There are elements here that are only hinted at, but which give the
plot a depth increasingly lacking in modern action flicks. And it asks the
kind of questions about morality, justice, exploitation and society that'll
keep you thinking for much longer that the film's two and some hours.

The direction and performances are amazing – the pre-visualization on this
movie must have been a nightmare and yet all the incredible special effects
blend perfectly into a visual style that is completely natural and assured,
as might be expected from Spielberg and Michael Kahn. There are, of course,
numerous references and homages to the work of Stanley Kubrick, which have
given a hint of the edge and flair of 'Clockwork Orange' or '2001'. I hope
it will continue to be a big influence on Spielberg.

Cruise delivers a first class performance as usual, but the discovery of
this film is Samantha Morton as Agatha. Who saw the film and didn't share
her terror and vulnerability? Little touches such as the way she clings to
Cruise, almost like a baby's reflex, make her a character you immediately
care about, innocent and tragic.

Anyway, if that's not enough to recommend the film, then you'll probably
never find another one you like again. But if you need another reason, go to
see it just for another fantastic soundtrack from the master, John Williams.