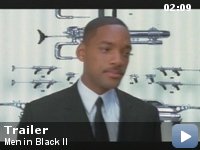 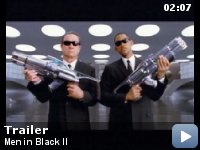 Agent J needs help so he is sent to find Agent K and restore his memory.

Storyline
For Agent J, it is another day at the office, monitoring, licensing and policing all alien activity on Earth. One day, J receives a report of an unauthorized landing of an alien spacecraft near New York. It is an old enemy of MIB, a Kylothian named Surleena. Who is searching for a powerful artifact called The Light of Zartha. J investigates and quickly realizes he is going to need help. Unfortunately, the other MIB agents do not work up to par like J can. So, J decides to bring back K. J must bring back K's memory as an MIB agent and try to stop Surleena, before she can succeed.

Man with Harvey, the Dog

Taglines:
This Summer, They're Back in Black.

Tony Shalhoub plays Jack Jeebs in this film, as well as in few episodes of
Men in Black: The Series and in
Men in Black.

Continuity:
When the giant worm eats Serleena's flying ship in the subway, J is driving, but when they land on the rooftop K is driving.

Peter Graves:
Although no one has ever been able to prove their existence, a quasi-government agency known as the Men in Black supposedly carries out secret operations here on Earth in order to keep us safe from aliens throughout the galaxies. Here is one of their stories that never happened, from one of their files that doesn't exist…

`Originality,' is, almost by definition, a one-time thing. In 1997, the
original `Men in Black' struck a nerve with movie audiences by showing that
even a big budget blockbuster, heavily loaded down with state-of-the-art,
computer-generated special effects, could still manage to seem light on its
feet. The makers of that film pulled off this feat of gravitational
legerdemain by coming up with a concept and a script overflowing with
creativity, wit, imagination and a cachet of `hipness' to go along with its
tone of anarchic playfulness.


Well, five years have passed and we now have `Men in Black II' to confirm
what most of us suspected all along: that works that rely on `uniqueness'
as their prime selling point are rarely ever able to duplicate their success
a second time around. Five years can be a lifetime in pop culture and what
seemed `cool' one summer can appear decidedly `old hat' the next. Without
that aura of cutting edge newness that defined the original, `Men in Black
II' seems like just another loud, over-the-top summertime
blockbuster.

Will Smith and Tommy Lee Jones are back playing Jay and Kay, agents for the
government's top secret organization whose job it is to monitor the
activities of the thousands of aliens who have secretly infiltrated earth's
societies and to help protect the planet from any possible threat from
interstellar space. Smith and Jones still appear to be quite comfortable in
their roles and they are aided by Lara Flynn Boyle, as Serleena, the baddest
alien this side of Darth Vader, and Rip Torn, delightful as Zed, the
slightly cracked head of the Men in Black agency.

Although the special effects in this film are, as one would expect in this
day and age, astonishing and virtually seamless, the same can definitely NOT
be said for the film's screenplay. The story moves along at a fairly fast
clip, but it rarely makes us laugh. In fact, the script comes across as
undisciplined nonsense, lacking both logic and coherence. Unlike in the
earlier film, we get the sense that literally everything here has been
placed at the service of the special effects. There's an awful lot of
running and bouncing around but rarely to any point or purpose. Indeed, we
end up feeling at the end somehow more exhausted and drained than
exhilarated and euphoric. It would appear that director Barry Sonnenfeld
thought that if he could just keep the thing MOVING we wouldn't notice that
he had nothing new to offer in this retread. It doesn't work. In fact, if
`Men in Black II' shows us anything, it is that just because something MOVES
doesn't mean that it can't bore us at the same time.

TagsUSA
Minority Report
The Importance of Being Earnest