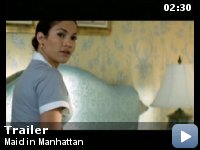 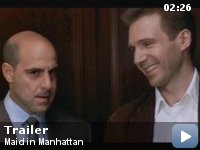 A senatorial candidate falls for a hotel maid, thinking she is a socialite when he sees her trying on a wealthy woman's dress.

Storyline
Marisa Ventura is a single mother born and bred in the boroughs of New York City, who works as a maid in a first-class Manhattan hotel. By a twist of fate and mistaken identity, Marisa meets Christopher Marshall, a handsome heir to a political dynasty, who believes that she is a guest at the hotel. Fate steps in and throws the unlikely pair together for one night. When Marisa's true identity is revealed, the two find that they are worlds apart, even though the distance separating them is just a subway ride between Manhattan and the Bronx.

Taglines:
This Christmas … love checks in.

In the Spanish dubbed version, Bob Hoskins character has the same dub-player as Anthony Hopkins in
The Remains of the Day. Both are butler characters.

Continuity:
When Marisa and Christopher go to the park to walk Christopher's dog, they almost walk off without her son… but also end up completely leaving the dog behind. The dog inexplicably disappears for the rest of the scene before reappearing in the hotel later.

Marisa:
Come on. Get your coat. We gotta go. You have everything?

Don't waste your time – watch "Sabrina" once again instead!


The story? Cliché, cliché, cliché, the umpteenth remake of Cinderella
with not a single interesting addition. The script? Formula (and lame
at that). The cast? Jennifer Lopez's turn as Cinderella/Sabrina proves
she does not remotely belong to "rags-to-Princess" roles; she is
galaxies away from Audrey Hepburn or Grace Kelly (or even "Pretty
Woman" Julia Roberts), no matter how expensive the jewelry or costumes
she wears. Ralph Fiennes seems to be on an O.D. of Prozac, with a
perennial foolish smile on his face, wishing he were Cary (or even
Hugh!) Grant — shame to see a talented actor in such a puffy role.
Natasha Richardson is wasted in the obligatory dumb blonde part,
Stanley Tucci hams it up irritatingly, Bob Hoskins knows and shows his
role is an embarrassment. On a less negative note, kid Tyler Posey is a
real charmer, and manages to survive his "cutie" part. The direction?
Well, no doubt Wayne Wang is a professional and I hope he was paid a
LOT of money to lend his prestigious name to this fluffy cake – I only
wish the word "professionalism" were taken more seriously, as in
"professional integrity"…Where is the Wayne Wang that directed the
surrealistic "Life is Cheap…But Toilet Paper is Expensive" and the
cool "Smoke"?


Sit through this only if you are in a hypoglycemic fit; otherwise watch
"Sabrina" once again and marvel at real star power, witty dialog and
charm to spare!

TagsUSA
Infernal Affairs
The Lord of the Rings: The Two Towers