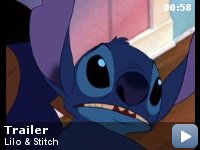 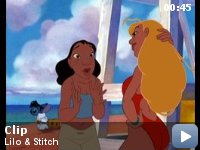 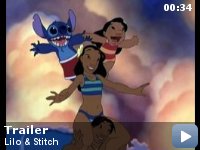 A Hawaiian girl adopts an unusual pet who is actually an notorious extra-terrestrial fugitive from the law.

Storyline
In a place far, far away, illegal genetic experiment #626 is detected: Ruthless scientist Dr. Jumba Jookiba has created a strong, intelligent, nearly indestructible and aggressive being with only one known weakness: The high density of his body makes it impossible for the experiment to swim in water. The scientist is sentenced to jail by the Grand Council of the Galactic Federation. The experiment is supposed to be transported to a prison asteroid, yet manages to escape Captain Gantu, who was supposed to deliver him there. With a stolen police cruiser (the red one), the destructive being races towards a little and already doomed planet: Earth. Stranded on Hawaii, experiment #626 can't actually do much harm: water all around, no big cities and two well-equipped representatives of the Galactic Federation already following close behind to catch him again. But Dr. Jookiba and the Earth expert Pleakley never could have guessed that earth girl Lilo adopts the experiment as dog…

Taglines:
There's one in every family.

Originally, Stitch was going to be an intergalactic gangster, Jumba was going to be a disgruntled member of his gang who was left behind during a heist and was going after him as revenge, and the other members of the gang would have been the ones who came to get him in the third act. The filmmakers felt that Stitch was more sympathetic when the audience thought of him as younger, and so was changed from a hardened criminal to a genetic experiment, and Jumba became the scientist who created him.

Continuity:
When Nani invites Cobra Bubbles into the house, she opens the back door and leaves it open. But later on when she's chasing Lilo around the house, the door is closed.

Grand Councilwoman:
How do you plead?

Jumba:
Not guilty! My experiments are only theoretical, and completely within legal boundaries.

Grand Councilwoman:
We believe you actually… created something.

Jumba:
Created something? Hah! But that would be irresponsible and unethical. I would never, ever…
[Stitch is revealed]

Jumba:
…make… more than one.

Is this a Disney movie???

Project "Six-Two-Six" is deemed too dangerous by the "Grand Council." A
hideous genetic creation from the lab of mad-scientist "Jumba," (David
Ogden
Stiers) project Six-Two-Six is put on board a space ship to be banished
to
a nice little deserted asteroid, where he can live out the rest of his
days.
On the way there, project Six-Two-Six takes over the ship, and then
escapes
using what looks like a space squad car. He eventually crash lands on one
of the islands of Hawaii (Kauai?) where a little five-year old orphan
girl
named "Lilo" (Daviegh Chase) finds him in a dog pound (don't ask) and
takes
him home as her new pet dog, "Stitch" (Chris Sanders). Of course the
Grand
Council soon realizes what has happened, and sends agent "Pleakley" (Kevin
McDonald) along with the mad-scientist to the island to recapture
experiment
Six-Two-Six.


And so begins one of the most unusual and creative animated films from the
Disney studios. Featuring a completely new style of drawing, and
backgrounds that look like watercolor paintings, Disney is taking a bold
step in trying something a little different. The artwork seems like a
combination of "Winnie-the-Pooh" and Saturday morning cartoons. The
dialogue and slapstick comedy is much more reminiscent of Warner Brother's
beloved "Loony-Tunes." Except for a handful of well chosen Elvis Presely
songs, and some beautiful Hawaiian music, there are none of the musical
numbers that one would expect to find in a typical Disney film. (I, for
one, didn't miss them.)

We soon find out that Lilo is an orphan, living with her older sister Nani
(Tia Carrere) in what could be comfortably called a "dysfunctional"
household. Nani is trying hard to make ends meet and be a mother to her
young sister, who is having a very difficult time adjusting to life
without
her mom and dad. The creators of the film do a superb job with the
character of Lilo, making you identify with her loneliness and isolation
without making it depressing. They also very accurately portray the
problems with an older sibling raising a younger, and the friction and
fighting that results is typical of what one would find in this sort of
arrangement. The subject matter is very mature, but the animators do a
fantastic job bringing it home to a level that small children can
appreciate.

Nani decides Lilo needs a dog to keep her company, so off to the kennel
they
go. Lilo just falls in love with Stitch, the "talking dog," and decides
to
take him for a pet. It is with this most unlikely of characters that Lilo
can find someone to confide in, to share her passions with (like Elvis),
and
to share the pain and sorrow that comes from being without parents.

Stitch was created by the mad-scientist Jumba to be an evil little
monster,
but in the care of Lilo, he realizes his own aloneness, and his need for
love and acceptance. So the evil little alien allows Lilo to take him by
the hand, dress him up as Elvis, and go surfing. (Stitch's one weakness
in
the inability to swim, so for him to go surfing is a surprising concession
to the little girl's whims.) His original motive for being "nice" to
Lilo
was to avoid the agents sent to recapture him, but soon he realizes that
Lilo and Nani mean more to him than just sanctuary.

Disney makes a point in all their trailers and commercials to show Stitch
as
the Rodney Dangerfield of animated characters: he don't get any respect.
Other than Lilo, everyone else in the film, including his creator Jumba,
is
trying to capture and/or kill him. Even Lilo's sister finds several
opportunities to take out her frustrations on the mixed-up little alien.
At first, it's rather amusing, since Stitch is about the most obnoxious
Disney character of all time, but after a while, you start feeling sorry
for
the little guy, and start hoping that he can find the love and acceptance
he's longing for.

I've often wondered why Disney's recent animated films cannot reach the
level that Pixar's CGI creations do effortlessly ("Toy Story," "Monsters
Inc."). Disney's cartoons seem dull and lifeless compared to the fun and
action that Pixar delivers on a regular basis. Well, it seems as if the
Disney animators are finally being infected by some of the magic that
comes
from their computer animation partners. "Lilo & Stitch" demonstrates
that
there is still some life left in that old art form that Walt made so
famous
many years ago.
But more importantly, this little gem has a lot of heart. You find
yourself
caring for the orphaned Lilo, you find yourself hoping that Stitch can fin
d
a place in a family, and you hope that big sister Nani can find a way to
keep social worker "Mr. Bubbles" (Ving Rhames) from taking Lilo away to a
foster home.

There are some really big themes being tackled in this film, such as
unconditional love, the need to belong to a group or community, self
sacrifice, and family unity. The animators handles all these extremely
well, and you find yourself getting a lesson in philosophy as well as
being
entertained. Yet the one theme that Disney pushes in all their
advertising, and several times during the course of the film, is the oft
repeated phrase: "Ohana means family, and family means NO ONE gets left
behind." This is a theme one finds emphasized in the recent combat films
"Black Hawk Down" and "We Were Soldiers," but isn't something you often
find
in a animated feature! That one little phrase, "no one gets left behind,"
has enough philosophical and theological weight to fill a college text
book.
It means that everyone, no matter what you may think of them, has value,
and that there is no such thing an "expendable" person. A better lesson
for young children would be difficult to find.