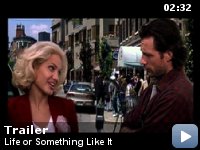 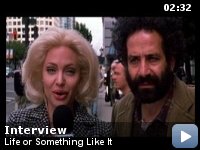 A reporter interviews a homeless man, who tells her that she's going to die and her life is meaningless.

Storyline
A reporter, Lanie Kerrigan (Jolie), interviews a psychic homeless man (Shalhoub) for a fluff piece about a football game's score. Instead, he tells her that her life has no meaning, and is going to end in just a few days, which sparks her to action, trying to change the pattern of her life…

Taglines:
What if you only had 7 days to live?

Mark Feuerstein had been in talks to play Cal Cooper, but Christian Kane ended up playing him.

Errors made by characters (possibly deliberate errors by the filmmakers):
When the score's 19-13 and Denver scores, someone in the bar says "we lost" but in fact at that point they were tied.

Lanie:
What would you do if you only had a week to live?

Pete:
I would go to all the people I care about, and I would try memorize their faces.

falls short of its potential

`Life, or Something Like It' is a romantic comedy with a better-than-average
premise. It attempts to address the question `if you suddenly discovered
that you might only have a week more to live, how would you spend that
remaining time and what changes would you make to your life?' Perhaps
because this IS a romantic comedy, the best the film can manage to do within
the tight strictures of the format is to raise a few of the more provocative
issues surrounding the theme – those dealing with the meaning of life and
the vagaries of fate, for example – then drop them so it can address itself
to the customary clichés one would expect to find in a film of this genre.
One only wonders how a more serious-minded European filmmaker, for instance,
might have tackled the same subject matter.


Angelina Jolie plays a beautiful, but thoroughly superficial and
self-absorbed TV news reporter living a near-perfect life in Seattle.
Indeed, when we first meet her, Lanie Kerigan seems to have everything going
for her: stunning good looks, a glamorous profession, a handsome major
league ballplayer fiancé, and now a major career advancement in the form of
a regular spot on a national morning news program. One day, however, her
world comes crashing in when she meets up with a homeless man on the street,
a self-styled `prophet of God' who tells Lanie that she will die within a
week. When all his other predictions begin to come true, Lanie realizes
that this man may not be quite the lunatic or charlatan all her friends and
acquaintances keep assuring her he is.

Given this setup, `Life, or Something Like It' can't help but grab our
attention. We wonder how we too would react if such a horrifying scenario
were to suddenly present itself in our own lives. The problem is that the
movie doesn't really do much with the material it has to work with. Nothing
Lanie does seems particularly thoughtful or meaningful when she is
confronted with potentially imminent death: indulging in some halfhearted
attempts to reconcile herself with an estranged sister and father, giving up
her health-obsessive diet and exercise regimen, and dumping the fiancé with
whom she discovers she has nothing in common. Considering the thematic
potential of this material, the film always seems to be lagging several
intellectual beats behind where it should be. This is particularly true in
the predictable love/hate relationship she shares with Pete, one of her
cameraman coworkers. Yet, oddly enough, it is this very pairing of Jolie
with Edward Burns that gives the film its moments of greatest charm. Both
performers are so likeable in their understated warmth and vulnerability
that we can't help liking and rooting for their two endearing characters.
Paradoxically, then, the film satisfies us most when it is at its least
innovative. The movie is at its worst in an embarrassingly unconvincing
scene wherein a boozed-up Lanie, sans makeup and carefully groomed coiffure,
leads a contingent of striking workers in a rendition of `Satisfaction' in
the middle of a live TV interview. Cloying moments like these merely serve
to remind us that we are stranded in movie fantasy land when the film could,
with a little more effort, have ascended to a much higher level. (The film,
incidentally, endorses a rather reactionary view of women in the workplace,
arguing that a woman needs to consider whether achieving success in the
corporate world is worth sacrificing a chance at achieving marital and
familial happiness – a quandary that never seems to be posed to male
characters in movies).

Despite the fact that it has moments of quality and charm, the film,
ultimately, feels like a case of lost opportunity. One finds oneself
leaving the theatre in a state of frustrating ambivalence: acknowledging
that the film works on a level of superficial entertainment but knowing
that, with a little more depth and insight, it could have amounted to so
much more.