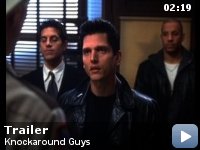 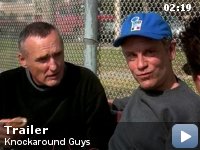 The wannabe sons of mobsters go to a remote town in the Midwest, and get themselves into more trouble than anyone could anticipate.

Storyline
The four sons (Diesel, Green, Pepper, Davoli) of major Brooklyn mobsters have to team up to retrieve a bag of cash in a small Montana town ruled by a corrupt sheriff. Specifically, the story gets started when Matt Demaret (Pepper) goes on a job to deliver the money for his mob father (Hopper) on the advice of his uncle (Malkovich). Things don't go as planned though…

Taglines:
If they don't finish the job, their fathers will finish them

Errors made by characters (possibly deliberate errors by the filmmakers):
Teddy tosses young Matty a dime and tells him to make a call. Local Payphone calls were 25 cents in 1987.

Taylor:
500 fights, that's the number I figured when I was a kid. 500 street fights and you could consider yourself a legitimate tough guy. You need them for experience. To develop leather skin. So I got started. Of course along the way you stop thinking about being tough and all that. It stops being the point. You get past the silliness of it all. But then, after, you realize that's what you are.

Can A Mafia Story Be Funny? Yes


This is another of those films I thought was great the first time,
so-so on the second. Overall, it got high marks – at least on the first
viewing – because it's an entertaining film that doesn't overstay its
welcome at 92 minutes.

Four young guys get involved in their first Mafia-type adventure. One
is asked to do a simple job of picking up a bag of money out west and
bringing it back home to Brooklyn. However, troubles ensue big-time
when the bag is stolen at the little airport out West. His three
friends have to come out and help him get the money back and all kinds
of problems develop.

There is some black humor in here which helps spice up the film, which
then turns very serious about halfway through with a few shocking
twists near the end.

The only problem I had with the movie is Pepper, who played Roger
Maris, the famous baseball player in the film '61." He looks so much
like Maris that I can't believe him as anyone else! To us baseball
fans, Pepper will always be Maris and nobody else.