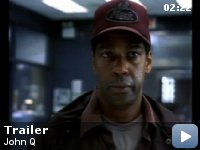 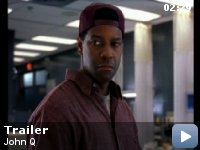 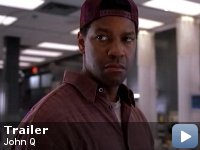 A down-on-his luck father, whose insurance won't cover his son's heart transplant, takes the hospital's emergency room hostage until the doctors agree to perform the operation.

Storyline
John Quincy Archibald's son Michael collapses while playing baseball as a result of heart failure. John rushes Michael to a hospital emergency room where he is informed that Michael's only hope is a transplant. Unfortunately, John's insurance won't cover his son's transplant. Out of options, John Q. takes the emergency room staff and patients hostage until hospital doctors agree to do the transplant.

Taglines:
Give a father no options and you leave him no choice.

The message "For Sasha" appears just before the end credits. This is a dedication to the director's daughter Sasha Cassavetes.

Factual errors:
When John attempts to kill himself, he pulls the trigger and the hammer falls, but the gun does not go off because he says the safety is on. When a Beretta's safety is on, the hammer cannot be in the cocked position and the trigger mechanism is disabled, thus the hammer could not have fallen and pulling the trigger would have had no effect anyway.

Tuck Lampley:
What about picture? We need picture!

Freddy B:
Hold on boss, I'm gonna make you famous!

Highly under-rated and ignored by most in 2002, "John Q" is one of those
movies that is sometimes too intelligent for a viewing public unfamiliar
with topics never really thought about in common societal circles (health
care and insurance policies, rights of blue-collar citizens, media
exploitation, law enforcement practices and over-paid medical specialists).
Denzel Washington's young son falls out one day at a little league baseball
game. The diagnosis is frightening. Without a new heart, the boy will most
definitely die. Washington, a normal everyday citizen, lacks substantial
resources and benefits from his insurance to even get his son on a donor's
list. It is blatantly obvious that Washington and wife Kimberly Elise are
being strangled by red tape in a mercilessly heartless (no pun intended)
system. Friends Laura Herring and David Thornton (and seemingly countless
other ordinary people) do their best to help the couple raise money and soon
it seems that most everything they have is on the market to be sold. Work
and more hard work does not get the couple much closer to having the money
they desperately need. Washington realizes that time is now of the essence.
He has been pushed and pushed again and now he takes it upon himself to push
back. As a last resort he literally takes the doctor (James Woods) hostage,
along with other bystanders who have nothing to do with Washington's war
with the hospitals and insurance organizations. Immediately cops led by
Robert Duvall and Ray Liotta surround the hospital and the tenseness builds.
Hungry media cronies (who would not help Washington when he had asked
earlier) also try to benefit from the misery of all those that are involved
with their typical exploitation tactics (one thing Jerry Springer got
right). Will Washington's son be saved and is Washington actually willing to
take his own life in the venture so his boy can live? "John Q" is a very
impressive production from director Nick Cassavetes (showing much of the
same ability his late father John showed throughout his career).
Screenwriter James Kearns gets to the soul of an American society that has
been blinded by economics and inefficient big-wigs who have no business
possessing the careers they have. Morality has gone out the window and that
"hypocritical oath" that is so prevalent in the medical field seems to be
little more than a silly afterthought. "John Q" succeeds everywhere just
about except in its ending. The ending is a major mistake that took away
from some of the good things accomplished before the final ten minutes.
Washington, arguably better here than in recent triumphs like "Training Day"
(an Oscar-winning role) and "Antwone Fisher", goes to an even higher plateau
here. Much like Al Pacino in the equally under-rated "Dog Day Afternoon" (an
admittedly better picture), Washington dominates in a role that thrives on a
claustrophobic aspect that cannot be escaped or denied within the film's
running time. Duvall and Woods are also solid, as always, but Washington is
the man here. Strikingly accurate when pointing the finger at things wrong
with America these days, "John Q" is a thought-provoking production that
will cause its audience to think and learn about sometimes forgotten aspects
of human life. 4 stars out of 5.