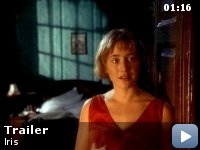 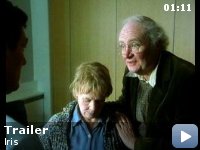 True story of the lifelong romance between novelist Iris Murdoch and her husband John Bayley, from their student days through her battle with Alzheimer's disease.

Storyline
Iris, based on the life of revered British writer and philosopher Iris Murdoch, is a story of unlikely yet enduring love. As a young academic, teaching philosophy at Oxford, Murdoch meets and eventually falls in love with fellow professor John Bayley, a man whose awkwardness seems in stark opposition to the spirited self-confidence of his future wife. The story unfolds as snippets of time, seen through Bayley's eyes. He recalls their first encounter over 40 years ago, activities they enjoyed doing together, and Iris' charismatic and individualistic personality. These images portray Murdoch as a vibrant young woman with great intellect and are contrasted with the novelist's later life, after the effects of Alzheimer's disease have ravaged her. Murdoch's great mind deteriorates until she is reduced to a mere vestige of her former self, unable to perform simple tasks and completely reliant on her at times frustrated yet devoted husband.

Taglines:
Her greatest talent was for life

Only the second film (after
Titanic) to have two actors nominated for an Academy Award for playing the same role in the same movie. In both films Kate Winslet played the younger version in the dual-nominee role.

Crew or equipment visible:
When Iris and John go to visit Maurice Charlton, a reflection of the camera lighting is seen on the inside of the front door.

Iris Murdoch:
Every human soul has seen, perhaps before their birth pure forms such as justice, temperance, beauty and all the great moral qualities which we hold in honour. We are moved towards what is good by the faint memory of these forms simple and calm and blessed which we saw once in a pure, clear light being pure ourselves.

A Life in Love

This film succeeds where the overrated "A Beautiful Mind" fell short. It
puts its subject's life into perspective and gives a sense of her worldview
and, needs, and desires–as opposed to just focusing on the illness. I
think it is also more effective in its use of different actors to portray
the main characters at different ages, rather than using distracting age
makeup, like in ABM. I came away from this with a profound admiration for
Iris Murdock, whereas I felt like I hardly got to know John Nash at
all.


But enough with the comparisons. This film stands well on its own as a
tribute to the companionship shared by Iris and her husband John Bayley
throughout their long, complex, relationship. Broadbent deserved that
Academy Award, although I would say he plays more of a lead character than
supporting. Seeing Iris through Bayley's loving eyes is what makes the film
an enriching experience. He is the one who must adapt to her unconventional
lifestyle, and their journey together is a rewarding one.

One person who commented stated that this was "another disease movie."
Funny how you never hear a complaints about "another gangster movie" or
"another romantic comedy" or "another suspense thriller." SO WHAT? First
of all, it is not a disease movie, it is at its heart a romance, and a
"meaning of life" film, much moreso than a film about Alzheimer's disease.
Secondly, the disease is the device used to illustrate their level of
understanding and commitment to each other. And finally, I cannot imagine
telling Murdock's story WITHOUT giving the disease its proper weight in the
course of the film.

The scenes when the characters are younger are blended seamlessly with the
latter day scenes. Kate Winslet and Hugh Bonneville (uncannily resembling a
young Broadbent) are very true to their older counterparts' personalities,
and add yet another dimension to film. All in all, this is a production of
which director Richard Eyre and cast (and Bayley, who wrote the book on
which the film is based) should be extremely proud. It should have been
seen by more people in 2001. Grade: A