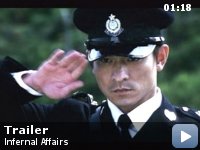 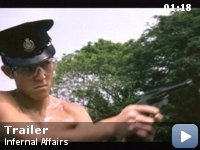 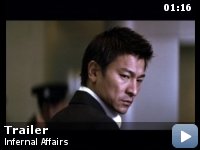 A story between a mole in the police department and an undercover cop. Their objectives are the same: to find out who is the mole, and who is the cop.

When referencing this film as the inspiration for the Best Picture-winning
The Departed, the announcer at the 79th Academy Awards mistakenly identified the Hong Kong production as Japanese.

Crew or equipment visible:
Wires can clearly be seen on the windshield when SP Wong lands on the taxi.

Lau Kin Ming:
Do all undercover cops like rooftops?

Chan Wing Yan:
Unlike you, I'm not afraid of light.

It has changed my expectation on crime drama forever


This movie has been regarded as the cream of Hong Kong gangster and cop
movie. And has won 22 awards. But we all know awards don't mean a thing
sometimes. The God Father of America cinema "Martin Scorsese" himself
is making a American version of the movie, titled: Departed. I'm
somewhat happy to see that this movie is being recognized and
acknowledged by a true master, but distraught to the possibility of
disappointment.


A little history of Hong Kong film industry, being in somewhat
government free state for over 100 years, Hong Kong movie industry
proliferated to the state of hysteria. On one hand, everything goes as
long as people get what they want for 2 hours worth. On the other hand,
lack of political drama has afforded the gangster and cop drama to
truly grow and mature.

Now back to the movie itself. 3 years ago, when I was still a poor
student, I was loitering in the local Chinese video store as usual,
looking for something exciting. The owner handed me a VHS copy of this
movie, he personally recommended it and said it's new and unique. So I
went home and watched it immediately. And then I said in my then dark
and dingy apartment for 30 minutes, in utter silence.

There was no plot twist, and no surprise ending, no Mr. M Night's heavy
handed gimmicks and Hollywood's camera tricks. But from the beginning
to the end, for full 2 hours, you can cut the tension with a knife. In
the end, you still don't want it to end. The story goes on in your
mind, questions, bits and pieces start to put together, characters
start to take shape even after the movie ended.

In my entire life, I've never seen a movie that there isn't a single
excessive frame, until I saw this movie. It has forever changed my
expectation on crime drama.

The story is genius and simple enough. A mole in police department
working against an undercover cop in drug trafficking mafia. They don't
know each other's identity, so it is like a invisible tug war between
the two competing against each other's wits. I won't reveal too much of
it even though like I said, there's no plot twist.

It's a fairly popular movie that has generated huge buzz when it came
out, and since been talked, compared and still highly regarded as
unsurpassed by countless fans worldwide. It has an all star cast in
Hong Kong cinema, and of course, the screenplay, the acting, the
editing, the camera work and overall directing is flawless judging by
all standards.

If you are adventurous enough to try even one Hong Kong movie, try this
one.

TagsVHS
Analyze That
The Hot Chick