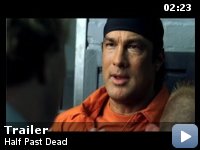 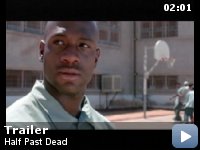 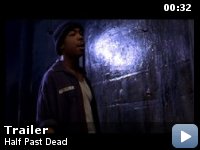 This movie tells the story of a man who goes undercover in a hi-tech prison to find out information to help prosecute those who killed his wife. While there he stumbles onto a plot involving a death-row inmate and his $200 million stash of gold.

Storyline
A criminal mastermind has set in motion a plan to infiltrate a high tech prison in order to persuade a death row inmate to reveal the whereabouts of $200 million worth of gold. It's up to an undercover FBI agent to stop him before it's too late.

Taglines:
The Good. The Bad. And the Deadly.

Miscellaneous:
'Yasmina Filali-Bohnen''s name is misspelled in the credits as "Yasmina Filall".

Sasha:
[Sasha talks about his wife]
She was the best part of me.

Oh dear! What can I say about Half Past Dead? I was really disappointed in
it. I was thinking….A Steven Seagal movie! Cool! We'll get to see him kick
people and flip people and break bones. We might even get to see him have a
stick fight with somebody! Excellent!

However, I was in for a rude awakening. This film can be summed up as
follows:

Take an episode of the A-Team, remove the lovable and roguish characters
such as Murdoch, Hannibal, Mr T and Face. Then get a writer/director to pen
a plot even Ed Wood would be ashamed of and who's too big a fan of The
Matrix and John Woo movies for his own good. Throw in a bunch of people with
really bad acting ability and who don't have real names. Finally, add in a
main star who's getting saggy around the midriff and doesn't appear to be
able to do his own stunts anymore.

The result? Half Past Dead. An action movie so ridiculous that it at least
made me smile right the way through. The plot holes are stupendously,
glaringly large – for example, prisoners who, when the jail is invaded,
fight the invaders rather than attempting to escape. Or how about the prison
itself, which has an armoury that contains heavy machineguns and
rocket-propelled grenade launchers? You also have a helicopter (bearing a
striking resemblance to a Huey) with some kind of video game machinegun
mounted in the nose.

Then there's Seagal himself. I like the guy. He CAN fight. He's even witty
in a way that Jean-Claude Van Damme will never be. But all through the movie
I kept hoping for that one great, defining fight scene. Never happened.
Instead we got people firing guns a lot and not hitting a whole Hell of a
lot. I mean, when someone runs down a narrow corridor and you fire a
sub-machinegun at them, there isn't a whole lot of places the bullets can go
other than down the corridor and into the target. Yet somehow they miss?
Even the A-Team would cringe at this foolishness. And then when it gets to
any kind of one-on-one physical stuff, we get treated to a shabby Matrix
rip-off, without the benefit of bullet-time. People getting kicked twenty
feet through the air and sundry other ludicrous acrobatic
nonsense.

C'mon Steven, you're better than this. Your career can't be over. Say it
ain't so!

This is instantly forgettable (except I'm forcing myself to remember for the
purposes of this review) and if you watch it, try to find it amusing in an
A-Team kind of way. But I doubt it'll be high on anyone's "re-watchable"
list. Out for Justice this ain't. More like Out to Lunch.