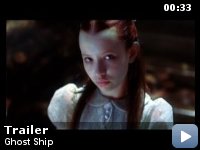 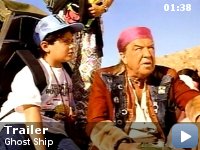 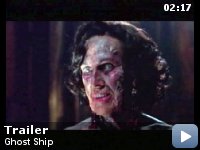 A salvage crew that discovers a long-lost 1962 passenger ship floating lifeless in a remote region of the Bering Sea soon notices, as they try to tow it back to land, that "strange things" happen…

Storyline
After discovering a passenger ship missing since 1962 floating adrift on the Bering Sea, salvagers claim the vessel as their own. Once they begin towing the ghost ship towards harbor, a series of bizarre ocurrences happen and the group becomes trapped inside the ship, which they soon learn is inhabited by a demonic creature.

The opening floor deck sequence of the film where everyone is severed in the torso area by a cable, was originally conceived to be that everyone was decapitated, but the studio didn't like the idea.

Continuity:
When Epps is walking down the hall looking for Katie's room she is clearly wearing the heart necklace which she has not found yet.

Greer:
I can't hold her much longer, Murph. Port bow is heeling. She's taking on way too much water.

I'm rather pleasantly surprised after seeing Ghost Ship…I expected it to be
a lot sillier, more dumb and inferior than it actually is. Still a long way
from being a good horror film but a step in the right direction, to say the
least. Cast and crew paid attention to building up a horrifying atmosphere
instead of attacking the audience with lame and violent killing scenes.
That's an effort that gets my appreciation. The vicious opening sequence is
professional horror… a scene that grabs you by the throat and demands your
complete attention and curiosity for the rest of the movie. The high quality
level is held up a little while longer but unfortunately it loses his grip
during the second half. For as long as the mysterious, deserted ship is
portrayed as a complete riddle, the film is fascinating, interesting and
beautifully shot. As soon as a few plot-aspects are clarified, Ghost Ship
turns into a mediocre and predictable thriller…I'm convinced that, with a
slightly more intelligent script, this could have become one of the better
horror-thrillers since the new Millennium. Now, it's only regarded as a
reasonable and decent effort that lacks a bit of talent. Nonetheless, the
settings and decors make it worth watching. The graphic decorations aren't
overused, so it remains a beautiful experience to observe at least once.
Gabriel Byrne is acting far below his normal standards and yet he's still
great! All the other cast-members are pretty uninspired and forgettable. I'd
describe Ghost Ship as a nice waste of time. If you have the opportunity, I
advise you to search for an 80's horror title called `Death Ship'…a terrific
piece of trash of which Ghost Ship borrowed a lot of ideas.