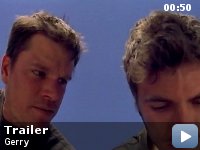 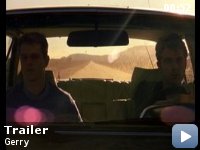 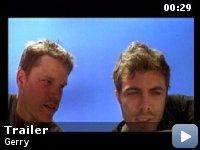 A friendship between two twenty-something men is tested to its very limits when they go on a hike in a desert and forget to bring any water or food with them.

Storyline
A friendship between two twenty-something men is tested to its very limits when they go on a hike in a desert and forget to bring any water or food with them.

The film opens without any company credits, no actor or director credits, and not even the title of the movie (except for the Miramax Films logo in non-theatrical prints).

Continuity:
At the end of the movie when Gerry is lying on his back, his legs change from flat to bent and back again. This obviously could not possibly happen due to his condition.

One of the best movies I have ever seen

I was curious about this film, but totally unprepared for how much it
affected me. GERRY worked, for me, on many different levels. In some ways,
it felt like a horror film, but without any supernatural element. Two men
get lost. That's the premise, and the movie takes its time to really
explore what it feels like to suddenly have no idea where you are. As the
film went on, something about it began to feel abstract, as if the film
wasn't just about being lost physically, but about what it feels like to
feel alone in the universe. I don't mean that to sound flighty or
pretentious, but the film gradually moves into a state of deep sadness that
is hard to describe. I'm sure (from the looks of some of the particularly
angry comments some people have posted) that this film won't be appreciated
by everyone who sees it. Some may find it dull. I found it completely
absorbing, and unlike anything I'd ever seen.


(By the way, if you don't like a film, that's fine. But some of the ANGER
displayed below is completely unjustified, and perhaps a sign of some deeper
trauma that has nothing to do with the movie you didn't
like.)