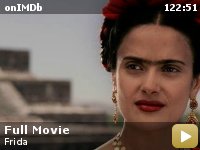 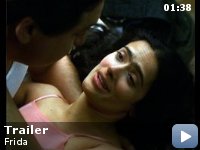 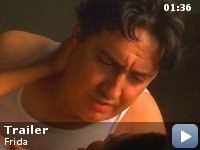 A biography of artist Frida Kahlo, who channeled the pain of a crippling injury and her tempestuous marriage into her work.

Storyline
"Frida" chronicles the life Frida Kahlo shared unflinchingly and openly with Diego Rivera, as the young couple took the art world by storm. From her complex and enduring relationship with her mentor and husband to her illicit and controversial affair with Leon Trotsky, to her provocative and romantic entanglements with women, Frida Kahlo lived a bold and uncompromising life as a political, artistic, and sexual revolutionary.

Taglines:
Prepare to be seduced

Revealing mistakes:
When Frida is in the tub with the Empire State Building visions, you can see a towel or wrap covering her chest.

Frida Kahlo:
Careful, guys. This corpse is still breathing. Try to get me there in one piece.

Salma Hayek (uni-brow and all) gives a genuinely great performance as
`Frida,' the Mexican artist who is more famous, perhaps, as the wife of
Diego Rivera than as a painter in her own right – although Rivera himself
always insisted that it was Frida who had the greater talent.

Frida Kahlo was a woman who endured a life of crippling pain caused by a
trolley accident in her youth, yet her innate energy, passion and love of
life – as well as her enormous abilities as a painter – allowed her to
overcome that daunting obstacle to achieve a measure of fame and
recognition. What she was not quite so successful in overcoming was her
strenuous love/hate relationship with Rivera, which came to occupy her
time
and her life almost as much as her painting. In many ways, `Frida' is a
typical artist bio, highly reminiscent of other recent films in the genre
such as `Pollock' and `Surviving Picasso,' both of which also dealt with
the
serial philandering of their male artist figures. `Frida,' however,
since
it is focused more intensely on the woman's perspective, offers a few new
insights into that seemingly inevitable theme. Frida, in many ways,
prides
herself on her independent, fiery nature, yet when Rivera becomes a part
of
her life, she quickly succumbs to his seductive charms. She marries
Rivera
even though she knows he is constitutionally incapable of remaining
faithful
to her. Thus, she sets herself up for a life of misery with a man she is
utterly incapable of living without. That the relationship is one of
utter
co-dependency is demonstrated by the fact that Rivera, even after their
numerous breakups, keeps coming back to his one true love.

Based on the Hayden Herrera biography, the Clancy Sigal/Diane
Lake/Gregory
Nava/Anna Thomas screenplay doesn't paint Frida as some sort of passive
victim of her own weaknesses nor as some sort of plaster saint martyr who
was entirely guiltless in her own troubled life. We see, for instance,
the
hypocrisy inherent in her own romantic dalliances, principally her
bisexual
flings with other women and even the affair she conducts with none other
than Trotsky himself during the period of his exile in Mexico (right
before
his assassination). We empathize with Frida because she functions as
such a
compelling figure in the context of the story, but we are never allowed
to
forget that she is a flawed human being, as capable of making a mess of
her
life as any of the men who generally occupy the lead position in these
stories.

If for no other reason, `Frida' is worth seeing for the marvelous sense
of
history it provides, chronicling the turbulent period of the 1920's and
1930's when socialism was the `in' cause for the art world to rally
around –
at least until the arrival of Stalin when the pipe dream of a worker's
state
and a classless society fell victim to the murderous brutality of a
regime
more totalitarian in nature than the one it had replaced. Director Julie
Taymor keeps the political issues of the era front and center, perfectly
integrating them with the tumultuous relationship at the story's core.
We
witness, for instance, Rivera's struggle with Nelson Rockefeller when the
latter commissions Rivera to paint a mural in one of his buildings. When
Rockefeller, the personification of capitalism, balks at Rivera's
glorification of Lenin in the painting, Rivera is forced to reexamine his
own commitment to the cause he so vehemently espouses (the film makes an
interesting companion piece to `The Cradle Will Rock' from a few years
back). We also get to see some of the lip service paid by these artists
to
the socialist cause, as they live the good life among the elite pampered
classes, often at the expense of the very workers whose rights they so
loudly proclaim in their work.

As Frida, Hayek literally carries the film. Tender and vulnerable one
moment, she can become fiery and self-confident the next. Hayak also
captures much of the excruciating physical torment that Frida was forced
to
endure during her lifetime – and which often became the central subject
of
much of her art. Alfred Molina makes of Rivera a fascinatingly
understated
figure. His seeming world-weariness camouflages a tenderness and ability
to
love deeply, which, apparently, few in his life – apart from Frida – were
ever able to see. Ashley Judd does a nice turn as one of Rivera's
socialite
devotees and Antonio Banderas makes his mark in his very brief appearance
as
David Siqueiros, a passionate socialist who accuses Rivera of kowtowing
to
the powers-that-be whom he claims to despise (Banderas is so good in the
role that one regrets he isn't given more screen time). Geoffrey Rush,
unfortunately, is not given enough time or good material to make much of
an
impression as Trotsky.

Taymor has had mixed results integrating Frida's works into the story.
The
director occasionally dabbles in surrealism by having Frida and Diego
literally enter into the world of her paintings. Sometimes it works;
sometimes it serves merely as a fancy distraction. Still, Taymor at
least
deserves credit for boldness in such scenes.

All in all, `Frida' provides a fascinating portrait of its heroine – and
one
of the best performances of the year to go along with it.