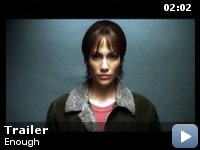 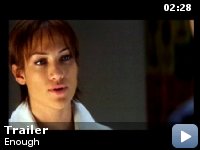 On the run from an abusive husband, a young mother begins to train herself to fight back.

Storyline
An abused woman discovers that the dream man she married isn't who she thought he was. She and her daughter try to escape (aided by her previous boyfriend), but he pursues her relentlessly. Fearing also for the safety of her daughter, she decides that there's only one way out of the marriage: kill him.

When Slim has a monologue in the car and Gracie is sleeping, actress Tessa Allen was actually asleep. The film makers tried while Tessa was awake but because they wanted to do long shots of Gracie sleeping it was hard for a young Tessa to keep her eyes completely still for the hour it took to film the scene. Instead, they waited until she had a nap and her mum picked her up and brought her into the car to film the scene.

Audio/visual unsynchronized:
When Slim visits the lawyer, he says, "Pardon my french, but I hope you got some pleasure out of it because you have really screwed yourself" his mouth says 'fucked' instead of 'screwed'.

Slim:
[Tearing up]
I'm not the kind of girl who's husband beats her up!

First off…why does the fact that this movie deals with spousal abuse and a
woman smart enough to run and hide automatically make it a ripoff of
"Sleeping with the Enemy"? Because "The Count of Monte Cristo" has
swordplay, does that make it a ripoff of all of the Zorro movies, or the
Robin Hood movies? Does the fact that Spiderman is a Marvel Superhero make
it a ripoff of "The X-Men"? Of course not. And only the very basic
storylines make "Enough" and "Sleeping…" similar at all. Let me
illustrate…


In "Sleeping with the Enemy", Julia Roberts plays a weak willed woman who
stays with her mentally abusive husband until she finally has enough and
leaves when she gets the chance to fake her death. Julia never
changes…always the weak willed, scared out of her gourd hiding
wife.

In "Enough", Jennifer Lopez plays a strong minded woman who decides to leave
her abusive husband as soon as she finds out what he is really like.
Jennifer never changes either…but in this case she maintains her strength,
and although scared out of her gourd also, she sets out to confront him in a
physical battle…his forte usually.

This movie was great entertainment. Anyone who says they felt this was a
total yawner, with no tension at all is too critical. This is what
entertainment is about. This was a great way to spend 2 hours as far as I am
concerned.

Ms Lopez is becoming a better actress with each film. But, as far as the
female actresses go in this flick…the little girl who portrayed Jennifer's
daughter out-acted everyone else…male or female. Two thumbs UP for this
little lady!!

TagsUSA
Irreversible
The Sum of All Fears