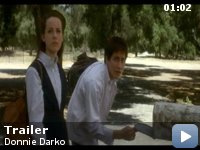 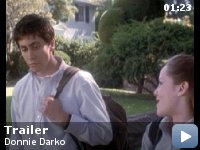 A troubled teenager is plagued by visions of a large bunny rabbit that manipulates him to commit a series of crimes, after narrowly escaping a bizarre accident.

Storyline
Donnie Darko doesn't get along too well with his family, his teachers and his classmates; but he does manage to find a sympathetic friend in Gretchen, who agrees to date him. He has a compassionate psychiatrist, who discovers hypnosis is the means to unlock hidden secrets. His other companion may not be a true ally. Donnie has a friend named Frank – a large bunny which only Donnie can see. When an engine falls off a plane and destroys his bedroom, Donnie is not there. Both the event, and Donnie's escape, seem to have been caused by supernatural events. Donnie's mental illness, if such it is, may never allow him to find out for sure.

Taglines:
What would you do if you knew the future?

The words "Cellar Door" are written on the chalkboard in Karen Pommeroy's classroom. When Donnie asks about their meaning, she replies that "This famous linguist once said that of all the phrases in the English language, of all the endless combinations of words in all of history, that Cellar Door is the most beautiful." In the director's commentary Richard Kelly mistakenly attributes the phrase to Edgar Allan Poe, but it was actually J.R.R. Tolkien who, in his 1955 essay "English and Welsh", said that "Most English-speaking people . . . will admit that cellar door is 'beautiful', especially if dissociated from its sense (and from its spelling). More beautiful than, say, sky, and far more beautiful than beautiful."

Continuity:
When Donnie's science teacher begins talking about Roberta Sparrow's book, Donnie puts the Slinky around his neck. The camera cuts to Donnie taking the book and cuts directly back to a rear angle of Donnie to show the Slinky still taut around his neck, which it would not be if he had released his grip on one end of it.

Donnie Darko is a type of movie that provides any viewer a type of
material that promotes hard thinking and even harder re-thinking. After
the
film ends, it's almost impossible to keep yourself from thinking of all
the
possible way to interpret such a film. It's not quite surreal or full of
quirky nonsense, it's more like a set of events, which seem to make sense
on
one level, no sense on another level, and finally perfect sense on another
level. The movie acts as an illusion to what's really going on, its
almost
pleasantly distracting.


Our main character, Donnie Darko, is a boy suffering from sleep walking,
and now what appears to be delusions. He manages to avoid a certain death
with the aid of a man in a bunny suit. This twisted bunny also informs
Donnie that the world will come to an end within the month. This sparked
curiosity and dread in Donnie, who also has every other aspect of a
teenager's life to worry about. The film proceeds with the feel of a teen
flick, the style of a horror, and a plot suited for a fantasy.

The end of the movie is the part which will make you want to watch it
again. You'll think you've discovered what's really going on after the
first time, prove yourself wrong on the second time, and will sit and
watch
every possible detail the third time. Richard Kelly has created an
instant
cult classic, and perhaps something more than that. Extremely well
written
with believable characters speaking believable dialogue.

I'll be the first to admit, this film is not for everyone. People will
either love it, or despise it with all their heart. I thoroughly enjoyed
this film and would recommend it to anyone who has a taste for dark humor
and a desire to put the pieces of the puzzle together over and over, long
after the film has ended.
10/10

TagsUSA
A Walk to Remember
Slackers