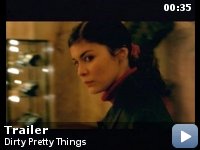 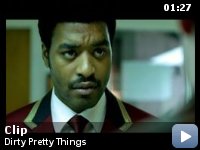 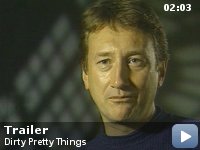 An illegal Nigerian immigrant discovers the unpalatable side of London life.

Storyline
Okwe, a kind-hearted Nigerian doctor, and Senay, a Turkish chambermaid, work at the same West London hotel. The hotel is run by Senor Sneaky and is the sort of place where dirty business like drug dealing and prostitution takes place. However, when Okwe finds a human heart in one of the toilets, he uncovers something far more sinister than just a common crime.

Taglines:
Every dream has its price.

Damien O'Donnell was originally attached to direct, but he decided to pass after problems with Harvey Weinstein. He directed
Heartlands instead.

Continuity:
When Okwe and Senay are drinking wine, Senay lifts a full glass. In the next shot, the glass is 3/4 full.

An unflinching look at society's expendables…


Frears' film details the story of those faceless, nameless human beings of
a
variety of ethnicities, who, for a multitude of reasons–all marked by
desperation–sneak into England. Then, until they wangle a way of getting
a
British passport, they lead the hunted, humiliating lives of the illegal
immigrant. The Nigerian Okwe is one such person: a pathologist in his
home
country, he is reduced to driving cabs by day and moonlighting as the sole
front-desk worker in a London hotel by night. During the day, he grabs a
couple of hours of sleep on the couch of a Turkish co-worker, a hotel maid
named Senay, played by Audrey Tatou. As in most hotels in these
straitened
times, the night staff deals with the usual sordid emergencies that arise
when the nocturnal creatures of the city are on the prowl. Prostitution
and
drugs are routine phenomena, but when he finds a human heart clogging a
toilet in one of the rooms, Okwe realizes that something far more sinister
is afoot.

For the illegal immigrants portrayed in the film, it is an ongoing
struggle
to hold onto some semblance of integrity, humanity, and dignity, as the
Society around them exploits and hounds them mercilessly, safe in the
knowledge that nothing would be reported to the authorities. Each
character
makes more compromises and greater sacrifices, all for freedom, which as
the
tagline of the film sums up, comes at a price. Senay is a hair's breadth
away from getting her residency papers, when she runs afoul of the law and
has to go on the lam to avoid deportation. Okwe, the cause of her
problems,
feels duty-bound to see that she remains safe. But by persisting in his
efforts to unravel the mystery of the heart in the toilet, he becomes
increasingly exposed to those who would harm him and Senay.

Interestingly, though this film is set in London, none of the main
characters is English: there's Juliette, an ironically-named feisty West
Indian hooker who plies her trade in the hotel; Ivan, the Russian doorman;
Senor Juan or `Sneaky', another hotel employee who makes use of the hotel
for his own money-making schemes; Gou Yi, a Chinese night porter in a
morgue; a motley collection of Somali, Nigerian, and Kenyan men who work
at
the cab company, and the South Asian owner of a sweatshop. Even the
Immigration inspectors who make the dreaded surprise checks for illegal
aliens are of color, but they have been elevated into a privileged stratum
of society by their passports. These people alternately help each other
and
prey on each other for another person's frailty is always a source of
profit; while a person with knowledge of one's past is someone to be
feared.
The London we see through their eyes is unrecognizable–squalid,
begrimed,
crowded, sleazy, perilous–not at all the gleaming promised land of
immigrant fantasies.

Part anthropological documentary, part thriller, and part tentative,
unlikely love story, this film keeps one riveted throughout. The
unfortunates in the film live by their wits and survive by hanging on to
their senses of humor. But as one degrading or dehumanizing experience
piles itself atop another, you see them question the worth of the Holy
Grail
that is the British passport. However as there is no going back, they are
forced to continue. Every now and then, they find it in themselves to hit
back, making you want to applaud their diffident, costly
bravery.

The film belongs to the lead pair. Ejiofor, with his expressive dark eyes
and handsome face, registers every affront to his humanity; he inhabits
the
character of Okwe completely and takes us along on the bleak, dangerous
journey that Okwe is forced into. Likewise, Tatou breaks our hearts as she
is exploited time and again; she is an actress of such luminous
transparency
and vulnerability that one empathizes with every tribulation of Senay's.
This is a far more dramatically demanding role than `Amelie' and Tatou is
up
to its challenges. Sergi Lopez, who's star-making turn in the French film
`With A Friend like Harry' did not go unnoticed in North America, has
created a charming whisky-guzzling monster in Senor Juan. Juan is the
ultimate amoral opportunist, a Brylcreemed, Mercedes-driving vulture, and
Lopez does not shy away from showing himself at his worst. Benedict Wong
and Sophie Okonedo are first-rate, too, as the philosophical chess-playing
morgue-worker buddy of Okwe and Juliette the rebellious prostitute
respectively.

`Dirty Pretty Things', brilliantly written by Steve Knight, maintains its
unpredictability right up to its surprise ending. Stephen Frears–no
stranger to the seamy side of human nature (`My Beautiful Launderette',
`Dangerous Liaisons', `The Grifters' being cases in point)–has crafted
the
film with delicacy and intelligence. A lesser director might have turned
it
into a sentimental morass, but Frears, with an unerring sense for a good
story, abstains from making his characters too noble, too courageous, or
too
upstanding, rendering them altogether human and memorable.

TagsEngland London UK
Infernal Affairs
The Lord of the Rings: The Two Towers