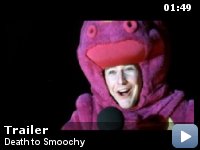 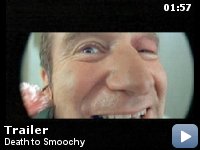 When he is fired for taking payola, the host for a children's television show plots revenge against his replacement, a rhino named Smoochy.

Storyline
Fired in disgrace, kids show host Randolph Smiley finds himself out on the street, while his replacement Sheldon Mopes, finds himself on the fast track to success with a new hit show as the proud purple rhino Smoochy. But things take a turn for the worst when Sheldon finds out that some of the people that he works with, and some he doesn't know he's working for, are all in it for the money. Meanwhile, Randolph is slowly turning insane with his only thoughts focusing on killing Smoochy and getting back to his life of luxury.

Continuity:
While Buggy Ding Dong is looking through the scope of the sniper, his eye is blue, but a close-up shot moments later reveals that his eyes are brown.

Burke:
Sheldon, I know you got a fetish for ethics.

Screw all those crappy reviews! This is a wonderful film! First of all,
I
was hoping to one day see a movie about the actors behind a children's TV
show who are completely nuts in real life. Well, I got my wish. I would
say that Adam Resnick (the writer) stole my idea, but I had no exact
thoughts on where to go with the premise. Well, Resnick went really far
with this wonderful premise and in result we have this dark, alluring,
hilarious comedy!


The cast is absolutely topnotch! I read one review slamming Edward
Norton's
performance in the film, saying that he phoned in his performance. Sure,
his performance in this film doesn't QUITE measure up to those in "Primal
Fear" and "Rounders," but he did one hell of a job, and I can tell he
researched the role very well to the point where he completely
disappeared
into the character. Whether it's a dramatic or comedic role, Norton
always
immerses himself in his roles. Though you can classify him as the
straight
man in this wacky satire, he says and does a lot of things that had me
cracking up, without any humorous intentions. The only thing that
disappointed me slightly was that Robin Williams didn't have as big a
role
as I expected. In the first 45 minutes, we only see him intermittently.
Actually, Norton really has the starring role and if Robin weren't a more
popular actor, he probably would've been billed first. Norton's one of
my
favorite actors, but I believe if you're gonna bill an actor as the star,
he
better be the star! But Robin Williams was still in top form. Catherine
Keener is beautiful, yet entirely convincing as an ego-driven TV
executive.
Jon Stewart doesn't have too many funny scenes, but his goofy Jerry Lewis
haircut was enough to make me crack up. Danny Woodburn–Mickey from
"Seinfeld"–shows off his fine acting skills, playing more than just the
"little guy." The always-amusing Vincent Schiavelli makes a few
appearances
towards the end. Michael Rispoli is both hilarious and likable as the
simple-minded ex-fighter, Spinner. Danny DeVito proves yet again that
his
skills behind the camera match his talents in front of the camera.

I don't suppose "Death to Smoochy" will be receiving any major Oscars,
but
it should at least be nominated for Best Art Direction. The sets,
lighting
and color pallette are absolutely incredible. As grim as it is, it's a
beautiful film to look at.

This is an R-rated comedy with a well-deserved "R." There's tons of
profanity and some truly crude (though not disgusting, thankfully) sex
gags.
If you're in the mood for an old-fashioned, Cary Grant-type screwball
comedy–you will be sorely appalled. Nevertheless, the humor is smart
and
witty, just drenched in cynicism. When Norton was doing the show and
pulled
out a cookie shaped like a man's genitals and Robin started screaming at
the
kids what it really is, I was dying with laughter. You may not feel good
about laughing at some of these jokes, but the sense of humor doesn't
lie.
But as cynical as it is, I didn't feel the movie was mean-spirited.
Because
I'm often turned off by mean-spirited comedies. I guess it's because as
scummy as these characters prove to be, there's at least one redeeming
quality about each of them. Sure, Rainbow Randolph is a loud, obnoxious
drunk. He lost his TV show. They snatched his dream, because of one
little
bribery slip-up. So he's not a saint. Is Mister Rogers a saint? As far
as
we know, but how do we know for sure he wasn't in the same theater as Pee
Wee Herman, disguised in a fake moustache and beard, pleasuring himself
as
well? Whatever the public don't know can't hurt them.

I was glad to see that the movie averaged a 6.9 rating on the IMDB. I
was
expecting a rating much lower, after its poor box office records and
countless bad reviews from major critics. Well, I had a blast! It's an
energetic, upbeat, fun-filled journey with a ton of laughs. I surely
hope
it one day reaches cult status. And the sequence over the closing
credits
is perfectly delightful. If you love Robin Williams and think he's one
of
the funniest men in the planet, if you're a fan of the great Edward
Norton,
if you think Catherine Keener is really hot, if you think Danny DeVito is
a
genius or if you simply wanna have a barrel of laughs–"Death to Smoochy"
will keep you alive with pleasure.

TagsCanada
He Loves Me… He Loves Me Not
Van Wilder