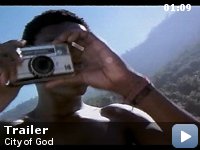 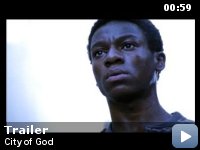 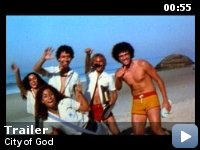 Two boys growing up in a violent neighborhood of Rio de Janeiro take different paths: one becomes a photographer, the other a drug dealer.

Storyline
Brazil, 1960's, City of God. The Tender Trio robs motels and gas trucks. Younger kids watch and learn well…too well. 1970's: Li'l Zé has prospered very well and owns the city. He causes violence and fear as he wipes out rival gangs without mercy. His best friend Bené is the only one to keep him on the good side of sanity. Rocket has watched these two gain power for years, and he wants no part of it. Yet he keeps getting swept up in the madness. All he wants to do is take pictures. 1980's: Things are out of control between the last two remaining gangs…will it ever end? Welcome to the City of God.

Taglines:
15 miles from paradise…one man will do anything to tell the world everything.

When Knockout Ned ('Mané Galinha' in the Brazilian original) kills someone for the first time, some people who live in the City of God approach him and congratulate him for the killing. The first woman to talk to him was played by the mother of the real Knockout Ned.

Anachronisms:
Lil' Ze is taken into custody by the police, Rocket runs after the police truck. The Police truck passes by a late – model Chevrolet S10, black, circa 2001. The movie is set in the seventies.

Zé Pequeno:
Whoa, the chicken ran away. Get that chicken, dude!

Stunning – in every sense of the word


Cidade de Deus seems to have a lot of praise on the IMDb boards, and
with good reason too. It simply is, in my opinion, one of the best
contemporary films ever made.

Based on true events and characters who live in the overlooked and
poverty stricken slums in the shadows of Rio de Janiero, where life
expectancy doesn't reach the 30's and drug dealers are kings.

The tale of the City of God, and its myriad of characters is told by
Rocket, a young man who struggles to make something of his life, other
than to wind up another victim of drugs or gang wars.

Not only are the characters in City of God absolutely fascinating, and
also very endearing, but also convincingly acted by groups of young and
unknown actors. The stoies are well-told, and at times, funny, and at
others, brutally shocking.

The cinematic style of the film gives a nod to Tarantino, with some
clever time-jumping, freeze-framing, and texts indicating another
chapter of the film. In every sense, a bit of a Brazillian "Pulp
Fiction" or "Goodfellas", but with its own unique flavour to it.

The City of God is a marvel, and a highly recommended film to watch,
but not recommended for the over-sensitive or easily distressed.