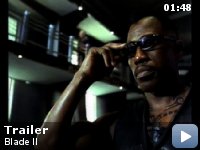 Blade forms an uneasy alliance with the vampire council in order to combat the Reaper vampires who feed on vampires.

Storyline
A rare mutation has occurred within the vampire community. The Reaper. A vampire so consumed with an insatiable bloodlust that they prey on vampires as well as humans, transforming victims who are unlucky enough to survive into Reapers themselves. Now their quickly expanding population threatens the existence of vampires, and soon there won't be enough humans in the world to satisfy their bloodlust. Blade, Whistler (Yes, he's back) and an armory expert named Scud are curiously summoned by the Shadow Council. The council reluctantly admits that they are in a dire situation and they require Blade's assistance. Blade then tenuously enters into an alliance with The Bloodpack, an elite team of vampires trained in all modes of combat to defeat the Reaper threat. Blade's team and the Bloodpack are the only line of defense which can prevent the Reaper population from wiping out the vampire and human populations.

The early scene in which Scud is watching
The Powerpuff Girls was originally written with him watching an episode of
Speed Racer ("Mahha GoGoGo"). However, the owners of the domestic rights wouldn't allow it.

Crew or equipment visible:
When Damaskinos is running towards a helicopter to escape, a camera shadow is visible across his back.

Scud:
You heard Cue Ball, right? Pretty soon, they're all gonna be daywalkers, man. When that happens, I'd rather be a pet than cattle.

Other than the explanation of where he came from, who he and everyone else
is, at the beginning, this film stands nicely on its own. for those of you
that know the first one, then this opening explanation will be a little
irritating (and a tad confusing, but it becomes clear later). The opening
does smell strongly of franchise potential, being repeated in all the
inevitable sequels still to come. Once past this though, we are lead
through
a massive fight and action scene that sets up the whole movie. and warns
anyone who can't stand Hong Kong action scenes that they are probably
watching the wrong screen.


The movie is essentially a platform for Snipes to have fun with his most
renowned character. And he does so with very entertaining results. The
movie
has reasonably well rounded characters, suspicion piled on top of
everyone,
some amazing set pieces and a good sense of humour. The impact of all the
blood and guts is reduced by the obvious fantasy of the fights (wires and
SFX a lot of the time), but its still pretty powerful.

The lead performances are all very good, although some of the peripheral
characters are a little too hammer horror. Luke Goss demonstrates great
potential, although you would need to see him without the make up, body
doubles, and special effects to really judge. and there is occasionally
that
urge to shout "when will I be famous." and the pure blood female vampire
who
takes a shine to blade is well worth being bitten by.

Overall it feels less like a sequel and more like a stand alone movie.
with
this in mind, I think its in fact better than the original (a rare example
of the exception that proves the rule).