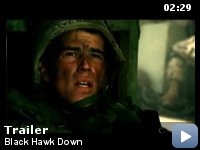 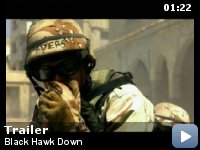 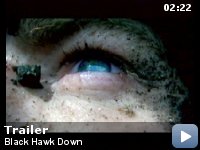 123 elite U.S. soldiers drop into Somalia to capture two top lieutenants of a renegade warlord and find themselves in a desperate battle with a large force of heavily-armed Somalis.

Storyline
Action/war drama based on the best-selling book detailing a near-disastrous mission in Somalia on October 3, 1993. On this date nearly 100 U.S. Army Rangers, commanded by Capt. Mike Steele, were dropped by helicopter deep into the capital city of Mogadishu to capture two top lieutenants of a Somali warlord. This lead to a large and drawn-out firefight between the Rangers and hundreds of Somali gunmen, leading to the destruction of two U.S. Black Hawk helicopters. This film focuses on the heroic efforts of various Rangers to get to the downed black hawks, centering on Sgt. Eversmann, leading the Ranger unit Chalk Four to the first black hawk crash site, Warrant Officer Durant who was captured after being the only survivor of the second black hawk crash, as well as many others who were involved.

Taglines:
Leave No Man Behind.

Specialist Grimes, portrayed by Ewan McGregor, is a fictional character, though given his administrative position and penchant for coffee, he is unabashedly based on the real-life Ranger clerk Spc John Stebbins, who was awarded the Silver Star for his actions during the battle. However, Stebbins was convicted in 2000 for child molestation and is currently serving a 30-year jail term. As a result, the Pentagon apparently pressured screenwriters to alter his name in the film, although a spokeswoman for the movie defended the change as "a creative decision made by the producers."

Continuity:
Cliff Wolcott's helmet model changes right after his helo is hit by an RPG. He wouldn't have switched helmets during a flight.

One of the best war movies of all time

When talking about war movies, there are many great ones that
immediately spring to mind. Since the 70's, three of them have
formed a bit of a holy trinity: Francis Ford Coppola's Apocalypse
Now, Stanley Kubrick's Full Metal Jacket, and Steven Spielberg's
Saving Private Ryan. These three movies have set the bar for all
other war movies that have come along since then. When it was
announced that Gladiator director, Ridley Scott, would be adapting
Mark Bowden's book, Black Hawk Down: A Story of Modern War,
filmgoers knew that they would be in for a treat.


For whatever reason, I don't remember hearing much about the
civil war in Somalia or about the Battle of Mogadishu on which
Black Hawk Down is based. The plan seemed simple enough: the
Army is sent into Somalia by the government to try to put an end to
the Civil War. On October 3, 1993, a group of them were sent on a
quick mission to capture the Somali warlord that had been running
the country with an iron fist. It didn't take long for the operation to
go
completely FUBAR as two Black Hawk helicopters were shot
down. Things went from bad to worse, as the Rangers found
themselves surrounded by thousands of armed Somalis, whose
only goal was to shoot any American soldier that invaded their
space. After "stirring up the hornet's nest", the mission becomes a
desperate attempt to maintain the Rangers motto, "Leave No Man
Behind".

Needless to say, Ridley Scott has made the ultimate war movie
with Black Hawk Down. Unlike some war films that temper the
battle with slower character-building sequences, you have to wait
only thirty minutes for the Rangers' mission to go into effect. And
the action doesn't stop for the next two hours, as the rest of the
movie is filled with flying bullets, explosions and bloodshed. The
fighting is so chaotic that it is hard to follow the action and tell what
is happening, at times, and it becomes almost too easy to
become desensitized to the violence. By the third time someone
yells "RPG's!" though, the entire audience knows to duck and cover
their ears.

While the American soldiers go in with a solid plan, it doesn't take
long for panic to set in, and pretty soon, you're not sure which side
is more disorganized. It's amazing to watch what seems like
thousands of extras playing the Somali militia swarming over the
soldiers, and the action and camerawork is reminiscent of a video
game as the soldiers try to escape their precarious situation
through the streets of Mogadishu. As the movie progresses, the
tension continues to build as the grim and unrelenting
hopelessness of the situation sets in both for the soldiers and the
viewer.

It's pretty amazing how much has been made of the 19 downed
American soldiers when over 1000 Somali men, women, and
children were killed during the raid. While the movie is clearly
weighed towards the American perspective, I can't imagine how it
must have felt to be the guy who gets to play "Dead Somali with a
Gun #354".

Although characterization has always been used extensively in war
movies to get the viewer to care about the characters, Black Hawk
Down works better because, for the most part, the soldiers are
personified as little more than grunts in the field doing the bidding
of their superiors. At least the soldiers had their names taped to
their helmets, so that this didn't have the problem of some war
movies, where it's sometimes hard to tell who is who.
Some of the best performances of the film come from Tom
Sizemore as the gung-ho Lt. McKnight and Josh Hartnett, who
plays the sergeant who leads the mission and feels personal guilt
every time a man is lost. Sam Shepard also is excellent as Major
General William Garrison, who sits back in the safe zone watching
his doomed men be overpowered by the enemy.
Eric Bana's part is small, but he has some of the best lines in the
film, really driving home the point of why soldiers do what they do.
Ewan McGregor's role is even more minor and insignificant, but
his Trainspotting compatriot, Ewen Bremner offers the movie's
little bit of comic relief.

As expected in a Ridley Scott film, the visuals and camerawork are
stunning with the movie having a gray almost monochromatic look
that makes the orange flames and red blood really stand out. As is
typical in Scott's recent movies, there is lots of flying dust, rubble
and debris mixed with slow motion shots of falling bullet casings
and splattered blood. He also uses animals and non-military
personnel well in some of the shots to show that this firefight is
happening in the middle of a populated market district.

A big deal has been made out of the blood and gore in Black Hawk
Down, but what is any true war movie without it? Though most of
the graphic violence on display is not far beyond Saving Private
Ryan, there is at least one visceral sequence that will make most
people squeamish, unless they watch those operation shows on
The Learning Channel for entertainment.
Black Hawk Down is quite an achievement in creating a realistic
representation of an event in recent history. Most of this movie
leaves the viewer aghast and incredulous of what they're watching,
and it's hard to believe that something like this could possibly
happen. Technically, this movie is an amazing feat that gives the
viewer one of the most realistic impressions of what it would feel
like to be in the middle of a war, which makes the atrocities of the
event seem all the more real.

In a genre that has brought out some of the best in directors and
actors, Black Hawk Down is easily the best war movie ever made,
and it has replaced A Beautiful Mind as my candidate for Best
Picture and Director.