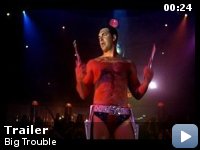 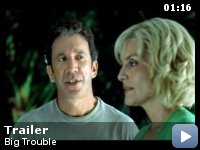 The lives of several Miami denizens, from ad agents to gunrunners to street thugs to law enforcement to school-children, intersect with humorous and dangerous results.

Storyline
A chain of events starts with the arrival of a mysterious suitcase in Miami. Arthur Herk, a corrupt business owner, wants to get his hands on the case. At the same time, two hit men want him whacked. Tired of his constant fixation on drinking and television, Herk's wife Anna and daughter Jenny decide to find new love interests in divorced dad Eliot Arnold and his son Matt. To add more complication, two thieves decide to steal the case and lead a Miami police team and two FBI agents on a wild goose chase that ends inside the Miami airport terminal.

Taglines:
They have forty-five minutes to save the world. They need forty-six.

Was supposed to be released in late 2001, but was postponed following the terrorist attacks of 11 September 2001 because of terrorist plotlines in the film.

Continuity:
At the airport at the end of the movie, Eliot and Matt are talking. Matt puts his right arm out and rests it on Eliot's shoulder. When the camera changes angles, Matt's arm is back at his side in less than a split second.

A Fun, Frenetic Farce That Didn't Deserve To Be A Bomb!

When my husband and I heard that Barry Sonnenfeld was going to direct the
film version of Dave Barry's first novel, we were pretty excited. Both
men
have a similarly nutty knockabout comic sensibility with a touch of the
surreal, and this wacky farce about a motley crew of Miami citizens
embroiled in a race to recover an atomic bomb seemed like the perfect
vehicle for them to pool their talents on. Well, it was! Hubby and I had
a
grand time — but alas, we seemed to be among the very few moviegoers who
even gave the flick a chance! I guess it didn't help that BIG TROUBLE's
originally-scheduled December 2001 release was delayed due to worries that
a
plot involving smuggling an A-bomb through laissez-faire airport security
would seem more disturbing than funny after the horrific events of
9/11/2001. Maybe most audiences are still too spooked right now to
appreciate the satiric possibilities in Sonnenfeld & Co.'s cynically
funny,
Billy Wilder-esque treatment of these elements — but I hope that down the
line, folks will give BIG TROUBLE a chance, because really, it's like what
might have resulted if Billy Wilder had ever had an opportunity to direct
The Marx Brothers. We were laughing throughout! The ensemble cast is
superb, from Patrick Warburton and Janeane Garofalo as members of Miami's
Finest, to Tom Sizemore and Johnny Knoxville as dunderheaded crooks, to
Tim
Allen and Rene Russo's chemistry as single (well, unhappily married in
Russo's case) parents who get drawn into the shenanigans when their
respective teenage kids Ben Foster and Zooey Deschanel (both delightful —
I
wouldn't be surprised if these two became big stars someday!) accidentally
foil a hit on Stanley Tucci (hilariously obnoxious as Russo's dreadful
second husband) by Jack Kehler and Dennis Farina (spoofing his earlier
role
in Sonnenfeld's GET SHORTY adaptation). Everybody gets a moment to shine,
even Jason Lee as a hippy-dippy drifter and Sofia Vergara (who looks
remarkably like a Latina Denise Richards) as Tucci's put-upon maid.
C'mon,
give this unfairly underappreciated gem a chance when it hits home
video!