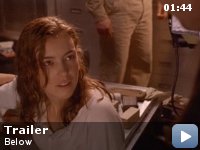 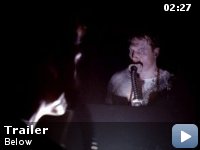 Storyline
In the dark silence of the sea during World War II, the submarine U.S.S. Tiger Shark prowls on what should be a routine rescue mission. But for the shell-shocked crew, trapped together in the sub's narrow corridors and constricted spaces, this is about to become a journey into the sensory delusions, mental deceptions and runaway fear that lurk just below the surface of the ocean and deep inside the human psyche.

Some filming for this movie took place on an actual WW2 submarine. The USS Silversides (which is available for tours) located in Muskegon Michigan was towed out into the middle of Lake Michigan where scenes with Bruce Greenwood were filmed. The Silversides had some minor re-painting done (rust coloration), but is now back to her original gray color. The rest of the sets and models used in this movie were all based on the look and layout of the Silversides.

Anachronisms:
US fleet subs of that era were incredibly cramped and would not have contained as much leg and head room as the one depicted in the movie. The submarine set used for interior shots is built on a larger scale to accommodate both actors and the shooting crew.

Lt. Loomis:
This is almost a day behind us, sir.

Lt. Loomis:
Well who are they? Americans, Brits, Italians? It doesn't even say.

Brice:
Well I think we can assume they're friendly, Mr. Loomis. Besides, it doesn't appear to be a suggestion, does it.

A smart, chilling "B" picture.

Here's the set-up: it's 1943 in the North Atlantic, and the U.S.S. Tiger
Shark picks up three survivors from a British hospital ship that was
torpedoed two days earlier; the discovery that one of the survivors is a
German leads to violence; and, then, really weird things start happening,
all the while a German cruiser is chasing the sub down. Is a ghost trying
to destroy the sub and its crew, or are they just imagining things through
convenient coincidences?

Below was written by Lucas Sussman, Darren Aronofsky and the film's
director, David N. Twohy; Aronofsky is the smart filmmaker behind the
art-house hit Requiem for a Dream, and Twohy has consistently specialized in
sophisticated "B" pictures like The Arrival and Pitch Black. Below offers
up an intricate storyline that keeps both the characters and the audience
guessing–when they and we aren't jumping out of our skins in terror.
Twohy's direction is an example of economic brilliance–the flick charges
forward, piling on the twists and scares methodically, but never
gratuitously–thankfully, this is a horror flick that's more about mood than
about gore–indeed, it's less in tune with modern splatterfests than it is
an homage to the cerebral Val Lewton thrillers of the 1940s (like The
Seventh Victim or Isle of the Dead).

And what mood this movie creates! Ian Wilson's cinematography is vibrant
and chilling, and the magnificent special effects never overwhelm the
story–except for a final, hauntingly beautiful shot that will linger in
your memory for quite awhile.

An added bonus is the cast of smart players: Bruce Greenwood as the sub
commander trying to hold his crew and himself together; Matt Davis as the
wet-behind-the-ears officer not really accepted by the crew; Olivia Williams
as an English nurse who is both suspect and suspicious; and Holt McCallaney
as a gruff officer.

It appears that Below is being dumped by its studio, Dimension, with little
advertising or fanfare; a shame, really, since it's one of the most
sophisticated and highest quality pictures I've seen in quite awhile. [Rated
R: Violence, language, brief nudity.]

TagsUSA
The Ring
Paid in Full