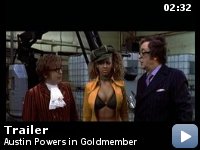 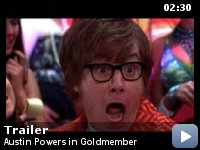 Upon learning that his father has been kidnapped, Austin Powers must travel to 1975 and defeat the aptly-named villain Goldmember – who is working with Dr. Evil.

Storyline
He's found his mojo, baby, and now Austin Powers is back again in this shagadelic comedy-adventure! The "sshhh!" hits the fan when Dr. Evil and Mini-Me escape from prison. Joining forces with the superfreaky Goldmember, they kidnap Austin's father, master spy Nigel Powers, in a dastardly time-travel scheme to take over the world. Before you can say "Shake Your Booty," Austin cruises to 1975 and teams up with sexy Foxxy Cleopatra to stop Dr. Evil and Goldmember from their mischievous mayhem.

Taglines:
On July 26th the Secret Will Be Exposed

Heather Graham reprised her role as Felicity Shagwell in a scene that was ultimately cut. Will Ferrell reprised his role of Mustafa in another deleted scene in which he has to answer a question after being asked four times.

whacked-out comedy with a lot of laughs

`Austin Powers in Goldmember' provides us with an hour and a half of
inspired silliness. Not all of the film's elements work equally well, of
course – a seemingly common occurrence in even the best of comedies – but
this third in the series of popular spy spoofs generates more laughs than
almost any other movie released in 2002.

Prime credit goes, of course, to Mike Myers, who both co-wrote the
screenplay and inhabits no fewer than four of the movie's main characters.
By this time, Myers has become so adept at his characterizations that
watching him at work and at play here provides one of the prime pleasures of
our viewing experience. Also in attendance are the usual suspects: Verne
Troyer as Mini-Me, Michael York as Basil, Robert Wagner as Number 2, Seth
Green as Scottie and Mindy Sterling as Frau Farbissinia. Folks added to the
brew this time around include Fred Savage, Michael Caine and Beyonce Knowles
as Foxxy Cleopatra, a bad-ass soul sister brought back from 1975 – Afro
hairdo and all – to help Austin rescue his kidnapped father and prevent Dr.
Evil from yet again trying to destroy the world (this time by using a giant
meteorite to melt the polar ice caps and flood the earth).

Co-written by Michael McCullers and directed by Jay Roach, the film has the
good sense to throw caution to the wind and give Myers free rein to indulge
himself in his own brand of inspired lunacy. The film starts off with a
deliriously clever and funny opening credit scene in which many of
Hollywood's biggest names make surprise, good-natured cameo appearances.
That sense of unbridled fun carries through pretty much the entire film,
although there are, as to be expected, ideas, bits and jokes that seem less
effective than others. As with the two previous films, this `Austin Powers'
suffers from the unfortunate tendency to both repeat and explain too many of
its jokes. Sometimes you do find yourself wishing that the writers would
put a bit more faith in the audience to get the humor the first time around.
Still, there seems to be much less of that in this particular episode, and
there are plenty of laugh-out-loud moments to more than compensate for the
occasional – though not all that frequent – clunker or lull that manages to
sneak its way in there from time to time.

`Austin Powers in Goldmember' wallows a bit overmuch in the sordid moments,
the gross-out gags, the locker room and bathroom humor that have become,
alas, the hallmarks of the modern comedy. In short, this is probably not
the film to take the family to see if your family includes impressionable
children and/or easily offended adults. The sexual and scatological meters
run into the red zone rather often in this film.

Nevertheless, `Austin Powers in Goldmember' works well if you enjoy a comedy
where the actors seem for once to have been actually having a fun time while
making it. Their infectious joy spills off the screen in a way that it
doesn't in movies like `Mr. Deeds,' `Men in Black II' or, perish the
thought, `The Master of Disguise,' to name just a few of the comedic bombs
that have been foisted upon the unsuspecting public this summer. In
contrast to the makers of those films, Mike Myers knows how to deliver the
goods and, in the process, give his fans their hard-earned money's worth.
Reserve us a seat for the next installment.