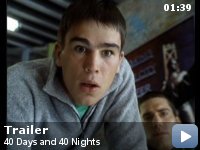 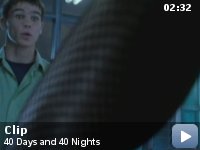 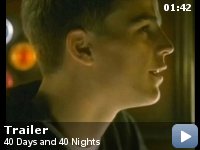 After a brutal breakup, a young man vows to stay celibate during the 40 days of Lent, but finds the girl of his dreams and is unable to do anything about it.

Storyline
Nicole broke up with Matt months ago and is now engaged to someone else. He's very good-looking and has no trouble finding other lovers, but that doesn't help because he's still obsessed with wanting her back. Then he gets the inspiration that swearing off sex for Lent (all forms of sexual activity, even kissing or masturbation) will give him the perspective he needs. So of course a few days later he meets a woman and they fall in love. Now Matt sees his vow as a personal matter, and won't even tell her about it, but his friends think otherwise, and now the complications begin…

Ashton Kutcher and Katie Holmes were originally set to play the roles of Matt and Erica. They both dropped out due to scheduling conflicts.

Anachronisms:
The sports page of the Chronicle that Paul Constanzo's character is holding has a headline about the Raiders beating the Seahawks, a game that would not have occurred during the Lenten season.

Matt:
[Tripping out on his 40th day of sexual abstinence, Matt wistfully rubs his thumb over the breasts of a Mrs. Butterworth syrup bottle]
She's filled with Heavenly sweetness.

Ryan:
[taking the bottle away]
I somehow don't think *Mr.* Butterworth would appreciate that very much.

I didn't know the 21st century looked like this!

It doesn't take much to get me to go to a movie, and I had high hopes
for a movie with a) Josh Hartnett, and b) a clever premise. I looked
forward to insightful and funny commentary about the relationship
between sex and love and men and women in our post-modern world. What I
got was breasts. Lots and lots of breasts. While the movie does a
fairly good job (by Hollywood standards) of including a panoply of
attractive women instead of a cookie-cutter ideal, the women are
ultimately reduced to meaningless bodies that crave the "power" that
sex supposedly gives them.


WARNING: WHAT FOLLOWS IS A COMMENT ABOUT THE END OF THE MOVIE, WHICH IS
SOMEWHAT RELEVANT TO THE PLOT. SO DON'T READ IF YOU DON'T WANT TO KNOW.

I could go on in that vein for hours, but what REALLY made me almost
walk out on this film is the fact that Matt, the hero, is RAPED by is
ex-girlfriend in the final minutes of the movie. Did nobody at the
studio recognize that act for what it is? If the gender roles were
reversed in that scene, it would have totally changed the mood and
content of the film. As it was, I kept waiting for Matt, or ANYBODY, to
call the police. Instead, movie goers get a happy ending where Matt's
new girlfriend finally FORGIVES HIM FOR BEING RAPED. Hooray for
Hollywood.

I guess it's not even safe to go to romantic comedies anymore. Sigh.