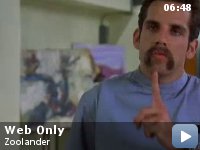 At the end of his career, a clueless fashion model is brainwashed to kill the Prime Minister of Malaysia.

Storyline
Derek Zoolander is VH1's three time male model of the year, but when Hansel wins the award instead, Zoolander's world becomes upside down. His friends disappear, his father is disappointed in him, and he feels that he's not good as a model anymore. But when evil fashion guru Mugato hires Zoolander, he thinks his life has turned back round again, that is until he finds out that Mugato has actually brainwashed him to kill the Prime Minister of Malaysia. Can Zoolander and his new friends find out how to prevent the incident before it's too late?

Factual errors:
Even though they can be requested, orange mocha frappuccinos aren't on the Starbucks menu and aren't orange.

(Announcer):
And here in Malaysia, there is an almost overwhelming sense of euphoria as the newly-elected prime minister has given this nation a gift of hope promising to raise the substandard minimum wage and end child labor once and for all. Already considered a living saint he has become this small country's greatest hope for a thriving future in the new millennium.

A Classic of the Idiot Genre


Since Zoolander was released, I think I can safely say that it's become
one of the most popular dumb comedies of the past ten years (a decade
that was all too saturated with dumb comedies). Maybe it's the
tongue-in-cheek attitude, or the clever writing, or the fact that it's
immensely quotable ("I'm pretty sure there's more to life than being
really, really, ridiculously good looking"). But whatever it is, it
makes for a terrifically fun movie.


Ben Stiller is Derek Zoolander, three-time male model of the year,
whose brainpower never quite caught up to his really, really ridiculous
good looks. After losing his title to up-and-coming model Hansel (he's
so hot right now), played by a Zen-ed out Owen Wilson, and the death of
three of his model friends in a tragic gasoline fight accident, he goes
on a quest to find his purpose in life. Turns out, his purpose in life
is as the face of Mugatu (Will Ferrel with the world's best hair)'s new
Derelicte fashion campaign–or so he's led to believe.

The plot is not strong. The characters are not fleshed out. But Ben
Stiller keeps Derek's stupidity hysterical instead of irritating, and
the rest of the cast adds gimmick after gimmick to keep things running.
(Come on, the coal mines of New Jersey? Tell me that's not funny.)