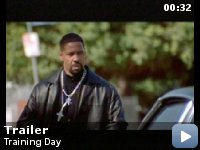 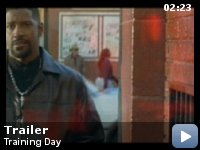 On his first day on the job as a narcotics officer, a rookie cop works with a rogue detective who isn't what he appears.

Storyline
In a city where streets are overrun by drug dealers, those who have sworn to uphold the law are breaking them to clean up the streets. Denzel Washington plays L.A.P.D. detective Alonzo Harris, a veteran narcotics officer whose methods of enforcing the law are questionable, if not corrupt. 'Training Day' follows Harris as he trains rookie Jake Hoyt over a 24-hour period. Ethical dilemmas arise for Hoyt as well as the audience as questions present themselves as to whether or not Harris' methodology for ridding the streets of South Central Los Angeles of drugs is right or wrong.

The film had several police technical advisors. Among them is Detective-Sergeant Brian Davis, an LAPD veteran who is one of the most respected and decorated officer of the infamous elite Special Investigation Section.

What Movie Were You Guys Watching?!!


I know I'm late as hell and I hate to break the overall 'vibe' about
this movie but this movie was great when I saw it in the theater and
gets better every time I watch it over again. And this is mainly
because of the performances by Denzel and Ethan. I don't know what you
guys expected but the movie CLEARLY suggests that Denzel is a crooked,
burnt-out, streetwise cop and Ethan is a 'wet-behind-the-ears' clueless
rookie. So knowing that, WHAT DID YOU GUYS EXPECT, Malcolm X, Remember
The Titans, The Hurricane?? If you were, then maybe you all need to be
checked out. The reason why this movie was so great is because it
wasn't the typical Denzel 'role model' movie. We KNOW that he can play
those roles well so it's a testament to his acting ability that he can
portray the other side of the spectrum. And my hat goes off to Ethan
because he bounces off Denzel flawlessly.


I hate to break the news to you guys but cops like Alonzo ARE OUT THERE
and need to be acknowledged. Acting like the problem doesn't exist does
not solve it. You don't have to go that deep to know that Alonzo was
once a good cop who just got fed up w/ 'police procedures.' If you
acknowledge that Jake's shallow-mindedness at the beginning of the film
only allows him to look at the perks of making detective and how the
progress of the day transforms him, you can really appreciate Ethan's
portrayal of him. Let's face it, a bad day at the office when you're a
narcotics detective differs greatly from that of an office executive
and the different stresses can warrant different results.

Even the street rhetoric was authentic. Maybe you guys need to get out
of the 'burbs more. You guys didn't actually expect eloquent dialogue
with little or no profanity, did you? The only part of this movie I
struggle with is Dr. Dre's terrible overacting and that isn't nearly
enough to take away from the overall result.

Next time you guys bash a movie, make sure to try to be objective and
rate what you see and not what you're used to seeing!!