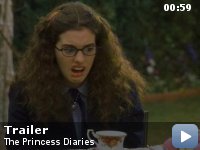 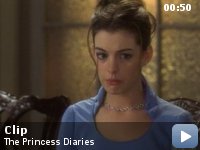 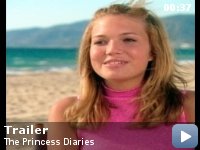 Mia Thermopolis is the average teenager – sweet, a little geeky and pretty much invisible to everyone with the exception of her mother…

Storyline
Mia Thermopolis is the average teenager – sweet, a little geeky and pretty much invisible to everyone with the exception of her mother, best friend Lilly and Lilly's older brother Michael. Making it through high school without throwing up is a challenge in itself for Mia, so it doesn't come as welcome news when her estranged grandmother shows up out of the blue and calmly informs her that she is in fact the heir to the throne of a European country called Genovia. Suddenly Mia's life is thrown into complete overload. She's being taught about scarves, waves and pears in order to become a perfect princess, she gets a makeover and a tough looking yet sweet bodyguard/limo driver called Joe. Things get out of hand when the media gets a hold of the story and suddenly Mia is thrust into the spotlight in both the newspapers and in school. On top of all that Mia has a choice to make…

Taglines:
She rocks. She rules. She reigns.

Garry Marshall's granddaughters watched the tapes of actresses auditioning for the role of Mia – they confided in their grandfather he should hire Anne Hathaway because she had good princess hair.

Revealing mistakes:
In the scene where Mia is driving the Mustang up hills with her grandmother, it is inferred that it is a manual because it keeps drifting backwards on hills (it even drifts all the way down a hill and hits a bus). Also there is a close-up shot of her putting both feet on the brake pedal. Later in the movie when she's driving to the ball in the rain, the car stalls and she lays down on the front passenger seat. You can clearly see the gear shifter and it is an automatic. Therefore it wouldn't drift backwards on hills.

I will admit that when I first heard a Disney movie called "The Princess
Diaries" was coming out, I thought it would be corny. But upon actually
SEEING the film, I found (as is usually the case when stupid judgmental
people make up their mind about films without watching them, I won't name
names, you know who you are…Tom!) that it was in reality a charming,
original, humorous and thoroughly entertaining family film.


The plot is fairy tale in nature: Mia is a social misfit with terrible
hair
and no self-confidence. Her only friends are eccentric activist Lilly and
rock band headliner Michael (played by real-life rocket Robert Carmine of
"Rooney") who has a little crush on her. Then, who of all people should
turn
up but Julie Andrews to tell Mia that her father (who she hasn't seen
since
she was tiny) was actually royalty and that she, Mia, was princess of a
country no one's ever heard of. What it comes down to is this: She has
until
a big embassy ball to decide whether she wants to give up the crown (and
basically open the country up to a hostile political takeover) or take her
place as princess. After a makeover (at the hands of funnyman Larry
Miller),
some training and at least four horrendously traumatizing incidents, she
decides…well, that would be giving it away, wouldn't
it?

This is not a movie for little girls dressed in tutus who want to be
princesses when they grow up. For the first time in the studio's tenure
(I'd
wager) this film depicts the responsibility of royalty. Mia tackles with
the
pressures of ruling a country. But for my money the best part of this
movie
is the love story. No, not Mia and the uniquely attractive rocker
(although,
that is great). A second, unscripted love story exists between Andrews and
her chauffeur, Hector Elizondo. That's terrific.

It's about being yourself and bettering yourself. It's about knowing who
your real friends are. It's about living up to your own expectations. It's
about smushing an ice cream cone on the blouse of a bitchy cheerleader who
deserves it. And maybe that sounds corny to all y'all (rustic expression)
but I know a lot of adults who could use lessons like these.