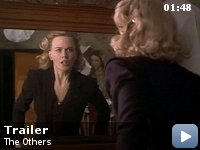 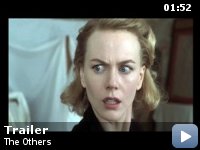 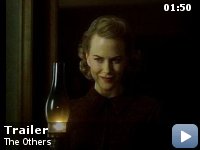 A woman who lives in a darkened old house with her two photosensitive children becomes convinced that her family home is haunted.

Storyline
A woman named Grace retires with her two children to a mansion on Jersey, towards the end of the Second World War, where she's waiting for her husband to come back from battle. The children have a disease which means they cannot be touched by direct sunlight without being hurt in some way. They will live alone there with oppressive, strange and almost religious rules, until she needs to hire a group of servants for them. Their arrival will accidentally begin to break the rules with unexpected consequences.

Taglines:
How do you keep them out, when they've already invited themselves in?

The disease the children have is an actual disease known as xeroderma pigmentosum. It is very rare with roughly a thousand people in the world that have it.

Grace:
Now children, are you sitting comfortably? Then I'll begin… This story started many thousands of years ago, and it was all over in just 7 days. All that long long time ago, none of the things we can see now, the sun, the moon, the stars, the earth, the animals and plants, not a single one existed. Only God existed. And so only he could have created them. And he did.

This is one of the best movies I have seen all year, and one of the top
horror stories ever told. It's creepy, simplistic, and eerie.

I was impressed by the enchanting simplicity of the plot, the lack of need
for "Hollywood" special effects, and the haunting atmosphere that loomed
over everything from beginning to end.

The first half, or even three quarters, seemed to move along a bit slowly,
but it felt necessary to build the suspense to the point where I was biting
my nails in anticipation of the inevitable.

Nicole Kidman's character, Grace… I was torn between empathy and disgust
for her at times, but she definitely succeeded at captivating me with their
lives and story. Predictable in parts, but it still leaves you guessing.
This was a quality ghost story, with an old fashioned ambiance; downright
spooky.

I was in awe of the ending, a fairly intelligent premise. It's the kind of
movie that lets you escape reality for a while by entertaining you, but at
the same time, returns you to the "real world" with your spine tingling,
wondering if there isn't some possibility of truth… Chilling.