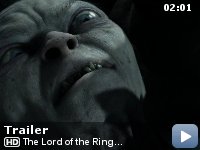 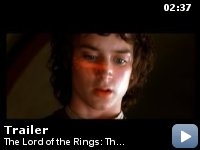 In a small village in the Shire a young Hobbit named Frodo has been entrusted with an ancient Ring. Now he must embark on an Epic quest to the Cracks of Doom in order to destroy it.

Storyline
An ancient Ring thought lost for centuries has been found, and through a strange twist in fate has been given to a small Hobbit named Frodo. When Gandalf discovers the Ring is in fact the One Ring of the Dark Lord Sauron, Frodo must make an epic quest to the Cracks of Doom in order to destroy it! However he does not go alone. He is joined by Gandalf, Legolas the elf, Gimli the Dwarf, Aragorn, Boromir and his three Hobbit friends Merry, Pippin and Samwise. Through mountains, snow, darkness, forests, rivers and plains, facing evil and danger at every corner the Fellowship of the Ring must go. Their quest to destroy the One Ring is the only hope for the end of the Dark Lords reign!

Taglines:
One Ring To Rule Them All.

At the birthday party, when Bilbo is naming various hobbit families, he says "Proudfoots" and a hobbit calls back "Proudfeet", with his large feet in the foreground. The shot was deliberately framed to imitate the shot used in
The Lord of the Rings, as an homage to the film that introduced Peter Jackson to J.R.R. Tolkien's works.

Revealing mistakes:
When Frodo falls and rolls down the snowy slope of the mountain (when they approach the pass), the line where his prosthetic hobbit feet ends on his lower legs, is clearly visible.

Galadriel:
The world is changed. I feel it in the water. I feel it in the earth. I smell it in the air. Much that once was is lost, for none now live who remember it. It began with the forging of the Great Rings. Three were given to the Elves, immortal, wisest and fairest of all beings…

Never before in my life were my cheeks more aching…

…but oh was I thankful for it!!! All through the movie I kept on having
this big large smile sculpted into my face. For the record, I'm 25 years
old, and I've read "The Lord of the Rings" in three times for the first time
when I was six or seven years old. Ever since then, I read it at least once
or twice a year – therefore you can count me as a fan, for I follow the same
cult fan procedure with "The Hobbit" and "The Silmarillion" as well. Now
onto the movie… Gosh, I saw it more than one time, and I keep wanting more
of it. It just never gets boring! I really enjoyed the little stuff that is
found throughout the movie for fans of the books (the map on Bilbo's table
in his house comes to mind, it is exactly as the one in "The Hobbit" book
that I own), and I also incredibly enjoyed the intro sequence with the
re-telling of the battle against Sauron from the Silmarillion, never has an
ultimate evil being been so well depicted on the screen. It truly is Sauron.


Those who argue the movie cuts too many parts or that it changes the story
too much are totally wrong. This movie could not have shown the whole first
time in its entirety – keep in mind that the audiobook version of
'Fellowship of the Ring' lasts well over ten hours, making a movie this long
would, well, make it way too long and besides, how would you financially
sustain such a project? I've read a reviewer saying he'd make all three
books with the time allowed for the first movie alone. I think it would be a
very fast-forwarding experience of a movie with 'Alvin and the Chimpmunks'
kind of voices, incredibly stupid to say the least.

Ok, so there are changes in the movie – well, this is Jackson's vision of
it. All of us have our own visions of the books, which may or may not be
compatible with that of Jackson's, but I can safely assume that nobody can
say they have a hundred percent the same vision of the story as Tolkien;
that's the thing with books: each reader has a different vision of it. As
for me, I was blown away. Never before have I felt so much at home in a
movie, it is as if I had taken a walk in the town where I grew up, the
Shire, Rivendell, Moria, Lorien, everything felt so much like home, I was
moved. I cannot tell of another movie that had me shed tears just by seeing
a landscape on screen.

As for the changes, well, I found good reasons behind all of them, and let
me tell you right away, I was happy that Arwen saved Frodo, yes, maybe
coming from a fan it will look like absolute heresy, but I enjoyed the scene
a lot. I did not enjoy it because it was supposedly politically-correct to
do so, or that I find Liv Tyler to be absolutely attractive; it was just
because I felt like even though it was a big change from the book, it was a
very good one indeed, it makes you discover the power, determination, and
courage of elves and the fact that even elven women, although great in their
beauty and seemingly fragile in appearance do not have anything to envy to
their male counterparts. And beside, as Arwen is to become a Queen later on,
it was pretty good to see her have a great first appearance.

The actors were great, they were a lot into their characters, and for the
first time, I saw elves as they were, quick, agile, terrifyingly effective
in battle – just look at how Legolas dealed with the hordes of enemies
without a single hint of fear in his eyes – these are elves as they should
be. Gimli was great too, I know people seem to think many characters were
not developed enough, but by the actions you can learn a lot. With Gimli a
lot can be learned about the dwarves, their pride, deep sense of honor and
family, their mistrust of elves, their love for strong beer and a good fight
against anything bigger, and their sheer hatred for orcs and the likes.
Aragorn was totally the ranger character, the ending scene as he walked
toward the horde of Uruk-Hai warriors was great, his attitude, his clothes,
everything about him just cried "ranger". Boromir was very well depicted,
desperate to save the people of Gondor, by any mean necessary, robbed of all
hope, yet in the end he redeems himself by showing his true valour, deep
down, he's willing to die to defeat evil, and when he recognizes his king in
Aragorn, on his last breath, I felt like watching a hero die, it was moving.
The hobbits were all great, Frodo is deeply sad and fatalist, and Sam is
just the 'best friend' everyone would like to have, just as it should be.
Finally, we have Gandalf, quite frankly, he looks mighty, Ian IS Gandalf.
The faceoff against the Balrog in the Moria is a memorable sequence, and
just shows how strong he really is, to be able to vanquish such a foe. I
can't wait for his return.

Quite frankly, I can't wait for the two other movies… In the meantime,
I'll watch this one over and over again. This movie has everything that a
good movie needs to have, and more. Plus, it just might bring more people to
actually read books that have more pages than the average little 25¢ novel
that has no value in it, which is great. Parents, maybe some scenes will
frighten your kids, but this movie has almost NO blood (even though it has a
good share of battle) and the foes are undeniably evil, plus it has good
values in it – friendship, courage, responsiblity, sacrifice for a good
cause, and the belief that anyone can help to change things. This is worthy
of Tolkien, this is a movie that will go down in history as being one of the
best ever, for sure.

Not Another Teen Movie
The Majestic