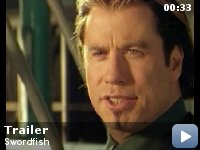 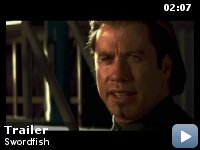 A secretive renegade counter-terrorist co-opts the world's greatest hacker (who is trying to stay clean) to steal billions in US Government dirty money.

Storyline
When the DEA shut down its dummy corporation operation codenamed SWORDFISH in 1986, they had generated $400 million which they let sit around; fifteen years of compound interest has swelled it to $9.5 billion. A covert counter-terrorist unit called Black Cell, headed by the duplicitious and suave Gabriel Shear, wants the money to help finance their raise-the-stakes vengeance war against international terrorism, but it's all locked away behind super-encryption. He brings in convicted hacker Stanley Jobson, who only wants to see his daughter Holly again but can't afford the legal fees, to slice into the government mainframes and get the money.

The helicopter is a Sikorsky S-64 Skycrane (CH-54 Tarhe). It is now being used to fight bush fires across Australia.

Continuity:
After being chased by Agent Roberts, Stanley Jobson is thrown against the front wing of Agent Robert's car, leaving the wing of the car dented. The next time we se the wing, the dents have gone.

Too much gloss can't hide a middling action thriller – 53%


There are, in my mind, two things that the film "Swordfish" is famous
for. The first is the fact that it features what I think is the most
beautiful car ever produced – the British-made TVR Tuscan. It's the
sort of car you'd like to see parked in your drive every morning, even
if you weren't going to drive it. The second is that it's the first
film that Halle Berry decided to get her baps out in and unnecessarily
so, as it turns out. While I debated with myself which one of the two
I'd rather look at, the film continued on it's crash-bang-wallop course
of international computer hackery and stylish but maniacal villains.


In "Swordfish", we enter the world of Gabriel Shear (John Travolta,
looking all the world like a 21st century Dracula) – renowned playboy,
super-fly criminal genius and determined to pull off the heist of the
century. He's James Bond, Shaft and Austin Powers in one, if you can
imagine so much ego fitting into an Armani suit. He recruits washed-up
former hacker Stanley Jobson (Hugh Jackman) to provide various worm
programs and hacking expertise to steal 9.5 billion dollars from under
the US Government's nose. As you do. For Stanley, it's a no-win
situation. Enticed by the prospect of a major pay-off and custody of
his daughter from his ex-wife, Jobson would tell Gabriel to shove his
job if it wasn't for the mysterious but sexy Ginger (Halle Berry)
egging him on. And jitters are the last thing the ruthless Gabriel
needs.

Despite his enthusiasm for the picture, producer Joel Silver has gone
down a notch on my list of favourite people in Hollywood. This is as
disposable action as you can get, almost as if he's trying to out-do
Jerry Bruckheimer. The explosions are bigger, the stakes are higher
(nine and a half billion, for God's sake!) and the characters are
cooler. Or so he thinks. Truth is, the near-constant kaboom of special
effects and pyrotechnics drown out what might have been an intelligent
thriller. By the time of the ridiculous finale (which makes no sense at
all), you've already forgotten everything else. And aside from Jackman
and Travolta who have most of the dialogue, Berry and Gabriel's
henchman Marco (Vinnie Jones, bizarrely if your name's Marco) have next
to nothing to do. Berry strips and Jones grimaces like their lives
depended on it. Berry should know better but for the inexperienced
former soccer thug, this should be a lesson well learnt. But then
again, this didn't stop him from remaking "The Mean Machine".

As action films go, it is undeniably entertaining. The plot twists its
way around the action, revealing more about Gabriel and why he's such a
sanctimonious prat. And the set-pieces are also very impressive, if
slightly over the top. Simply by shooting a SUV can one cause the
vehicle not only to explode like the Manhatten project but also make
the now flaming wreckage flip through the sky like a Romanian gymnast.
Physics clearly don't apply in LA, like the strange time-bubble
surrounding the city which allows Gabriel to fly to Oregan and back in
less than an afternoon. Hmmm, says I. Clearly, the film-makers were
trying to make as entertaining a piece as possible but they over-did
it. Less is more, or so they say and it is advice Silver and director
Dominic Sena would be wise to listen to. Shame, really. That TVR is
just gorgeous…