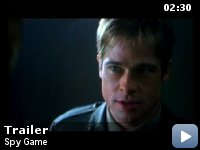 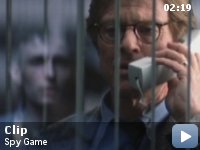 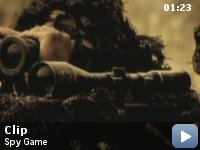 Retiring CIA agent Nathan Muir recalls his training of Tom Bishop while working against agency politics to free him from his Chinese captors.

Storyline
CIA operative Nathan Muir (Redford) is on the brink of retirement when he finds out that his protege Tom Bishop (Pitt) has been arrested in China for espionage. No stranger to the machinations of the CIA's top echelon, Muir hones all his skills and irreverent manner in order to find a way to free Bishop. As he embarks on his mission to free Bishop, Muir recalls how he recruited and trained the young rookie, at that time a sergeant in Vietnam, their turbulent times together as operatives and the woman who threatened their friendship.

Taglines:
"Poor is the pupil who does not surpass his teacher" (Leonardo Da Vinci)

The building identified as the US Embassy in Hong Kong is actually the headquarters of HSBC – the Hong Kong and Shanghai Banking Corporation.

Errors made by characters (possibly deliberate errors by the filmmakers):
Muir, after having Bishop elicit a piece of information, tells Bishop he gave out 4 facts about himself (Bishop) for one dubious piece of information: "You're straight, you're engaged, tomorrow is your girl's birthday, and you have no taste in women's fashion… What if she was an asset: You told her four lies that now have to be true." But Bishop *is* straight. He only told 3 lies.

Nathan Muir:
See that building across the way?

Nathan Muir:
Do you know anyone there?

Nathan Muir:
In five minutes I want to see you on the balcony.

Tom Bishop:
What do…

Tom Bishop:
Can't we discuss it over coffee?

In response to the negative reviews

I can't believe some of the nonsense I've read here. People are
complaining
that Redford looked too old in the flashback scenes — for one, I thought
he
looked believable. Secondly, Hollywood hasn't cloned Redford in a vat yet
so
we'll just have to live with scenes like this. So get over it. Others
complain that the movie is somehow BORING, which blows my mind,
considering
it's non-stop, fast paced action and dialogue. If you're attention span is
too short for this movie I'm sure you'll enjoy crap like "XXX". Others
complain about messy plot logic (how did a CIA operative get into a
Chinese
prison? Huuu duhh, I dunno! It's a popcorn flick you morons! It's not a
900
page novel or a documentary). The plot takes a few leaps here and there,
but
a Snake Eyes or Face/Off this film is not. I read complaints about the
'arty', flashy 'MTV' style editing and filming techniques — I actually
thought the movie was filmed and edited superbly and the contemporary,
TV-commercial style actually complemented the film. It's crisp, tight,
taut
and entertaining. You get the feeling this is a high-quality production,
whereas with something like "Mission Impossible 2" the same type of style
is
implemented but it comes off feeling cheap. Not here, not with this movie.
As with Enemy of the State, it works. I have a feeling some of the people
that thought it was boring simply couldn't follow what was going on. The
plot does make sense if you have the attention span to keep up.