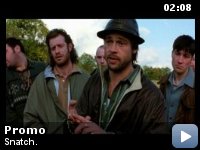 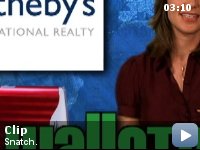 Storyline
Turkish and his close friend/accomplice Tommy get pulled into the world of match fixing by the notorious Brick Top. Things get complicated when the boxer they had lined up gets the shit kicked out of him by Pitt, a 'pikey' ( slang for an Irish Gypsy)- who comes into the equation after Turkish, an unlicensed boxing promoter wants to buy a caravan off the Irish Gypsies. They then try to convince Pitt not only to fight for them, but to lose for them too. Whilst all this is going on, a huge diamond heist takes place, and a fistful of motley characters enter the story, including 'Cousin Avi', 'Boris The Blade', 'Franky Four Fingers' and 'Bullet Tooth Tony'. Things go from bad to worse as it all becomes about the money, the guns, and the damned dog!

Taglines:
Now you see it, now you don't!

Continuity:
In the back of the truck after the diamond heist in Antwerp, Frankie gives his gun to another man. During this exchange it can be seen that Frankie does in fact have all ten fingers.

Turkish:
[narrating]
My name is Turkish. Funny name for an Englishman, I know. My parents to be were on the same plane when it crashed. That's how they met. They named me after the name of the plane. Not many people are named after a plane crash. That's Tommy. He tells people he was named after a gun, but I know he was really named after a famous 19th century ballet dancer.

"Snatch" is fantastic; and not least because it demonstrates emphatically
that the British movie industry is capable of rivaling even the best of
what
Hollywood can offer.

"Lock, Stock and Two Smoking Barrels" was one of the funniest movies
released in recent years, and "Snatch" takes everything that "Lock,
Stock…" did so well and does it even better.

Back are the cleverly intertwined plotlines, the hilarious one-liners, and
the simultaneously intimidating and comedic London villains. So is the
skillful editing, and often original cinematographic style. This time
however, it all looks somewhat slicker and better funded, and alongside the
British regulars are the odd American celebrity (Brad Pitt, Benicio Del
Toro).

Everyone in the film puts in an excellent performance, but Pitt stands out
as a charismatic and near-incomprehensible Gypsy boxer.

Like Ritchie's earlier film, this one takes a little while to find its
feet,
but once it does the pace doesn't slacken until the finale. One scene
featuring three guys and a squeaking dog in a stolen car stands out
particularly, and left the audience at my local cinema almost weeping as
punchline after punchline was uttered.

When it comes to comedies, I cannot recommend this one highly enough. If
you're after a good laugh, you won't find much to better
"Snatch".