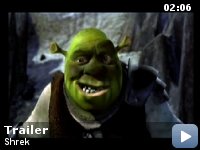 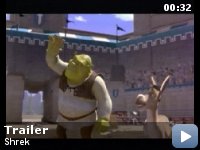 An ogre, in order to regain his swamp, travels along with an annoying donkey in order to bring a princess to a scheming lord, wishing himself King.

Storyline
When a green ogre called Shrek discovers his swamp has been 'swamped' with all sorts of fairytale creatures by the scheming Lord Farquaad, Shrek sets out, with a very loud donkey by his side, to 'persuade' Farquaad to give his swamp back. Instead, a deal is made. Farquaad, who wants to become the King, sends Shrek to rescue Princess Fiona, who is waiting for her one true love. But once they head back with Fiona, it starts to become apparent that not only does Shrek like Fiona, but Fiona is keeping something secret.

Taglines:
The Prince isn't charming. The Princess isn't sleeping. The sidekick isn't helping. The ogre is the hero. Fairy tales will never be the same again.

Loosely based on William Steig's fairytale picture book of the same name.

Shrek:
[narrating]
Once upon a time, there was a lovely princess. But she had an enchantment upon her of a fearful sort, which could only be broken by love's first kiss. She was locked away in a castle guarded by a terrible fire-breathing dragon. Many brave knights had attempted to free her from this dreadful prison, but none prevailed. She waited in the dragon's keep, in the highest room of the tallest tower, for her true love, and true love's first kiss.
[tears out a page from the book and shuts it]

Shrek is completely new. Never has a fully CGI movie taken on the twists,
turns, and surprises as Shrek has. It's a full parody of numerous
fairytales, and its humor is, well, humor at its best. Grown men will
laugh
at the jokes of Farquaad's Stature and the hidden meaning behind every
little comment. Of course Shrek, like all other movies, has its emotional
moments (so what if I lied about it being completely new?). And these
moments aren't cheesy or anything. They are kind of funny, but at the
time
of viewing you won't really feel like laughing. You'll feel like the
characters.


Like its CGI, Shrek has taken a new dimension. It stretches out. You're
in
the movie. No, wait, you're watching a movie. It's so hard to tell. The
characters are so real, so lifelike, it makes you feel you're there. The
environments are realistic, yet still animated. The wind whispers through
the grasslands and the characters' hair; the lightning and clouds are
really
there… aren't they?

I was stunned and absorbed in this movie. And unlike other movies, it has
more than just CGI. It's actually got a plot. And what a plot it's got!
This one is totally new. Shrek is ordered to rescue a princess from the
fiery keep guarded by a dragon in order to clear out his swamp of the
menacing fairytale creatures.

But it doesn't stop there. The movie is full of surprises and stretches
on
further into what actually happens after. The dialogue demands your
attention throughout the movie, and then the dragon comes in. Whenever
you
see the dragon, you'll know good things are bound to happen (but not
necessarily for the characters in the movie). The dragon is a comic
relief,
but still provides most of the action in the movie. She chases Donkey and
Shrek through the keep, she flies to help rescue Fiona from a despicable
marriage, and she even has the satisfaction of swallowing a
midget.

Now some disputes have arisen about certain things. But I must say what I
always say: this is only a movie, and it has no deeper meaning (despite
the
parodies). Take it as it is. There can be nothing offensive from Shrek
unless you have something against overthrowing tyrants and good-natured
humor.

I must take a moment to speak about Donkey. He is, and always will be,
one
of my most favorite characters in the world of movies. Eddie Murphy was,
no
doubt, the perfect actor for him. He is so funny, so unique, and so…
fluffy. What a perfect donkey! His design is flawless and his dialogue
perfect. I can find nothing bad about this character.

Shrek is perfect for everybody to see. The little ones will love the
vivid
colors and lush landscapes. The adults will enjoy this as well as the
intelligent humor and deep plot. And no one could dislike the arrangement
of songs. They fit really nice into the movie. Harry Gregson-Williams
and
John Powell's composed music is impressive (especially the theme for
Escape
from the Dragon).

Shrek is brilliant moviemaking. With a groundbreaking DVD, an all-star
cast, great music, excellent graphics, and a great parodized yet original
plot and storyline, Shrek is no doubt one of the best movies I've ever
seen.