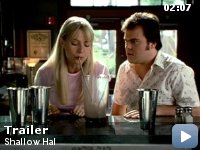 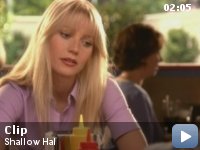 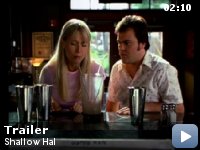 A shallow man falls in love with a 300 pound woman because of her "inner beauty".

Storyline
Following the advice of his dying father, Hal dates only women who are physically beautiful. One day, however, he runs into self-help guru Tony Robbins, who hypnotizes him into recognizing only the inner beauty of women. Hal thereafter meets Rosemary, a grossly obese woman whom only he can see as a vision of loveliness. But will their relationship survive when Hal's equally shallow friend undoes the hypnosis?

Taglines:
True Love Is Worth The Weight!

In the scene where Rosemary and Hal are walking along a street, and Rosemary is enjoying a caramel apple, the two pass by a glass window. In the reflection you can see Rosemary's true figure.

Continuity:
At the DoubleDoor Inn, where Rosie is seen dancing with the guy with spina bifida, we see the other guests applaud and approach them once they have finished dancing. And if you look closely you will see that Hal joins the crowd at the right hand side of your screen. But as it cuts to the next shot where Rosie is walking away from the crowd, we see Hal catch up with her from the opposite side where he was standing with the crowd.

One of the sweetest movies I've ever seen!

No contest, I will say this marks the best of the Farrelly Brothers. Not
because this film is laugh-out-loud funny–it's funny, but not
hilarious–but because it has a great heart and delivers a beautiful
message
without any corny Hollywood pretentions. Sure, the premise is funny–a
shallow guy gets virtually hypnotized into thinking all the unattractive
women he sees are foxes and ends up going out with a 500-pound woman who he
also thinks is a fox. It's a great premise, but the Farrellys don't fixate
on that premise alone, preventing it from turning it into a lame, one-joke
slapstick comedy. This is a comedy with heart–a rare finding. In between
laughs, you really get wrapped up in the characters and storyline. The
gags
flow quite naturally, without the Farrellys forcing any humor onto the
screen. If a comic opportunity comes along, they take advantage, but
there's no random acts of slapstick.


I am pleasantly surprised with Jack Black, who has proved in this movie
that
he doesn't only have what it takes as a comic actor, but also as a serious
actor and a romantic lead. I've always enjoyed seeing him on screen, but
he
usually plays the same wound-up, hyperkinetic characters. Basically, he's
funny, but you still know you're watching Jack Black on screen. This time
he exercises his ability as a method actor, he succeeds well. Gwyneth
Paltrow is adorable and sweet, capturing the audience's sympathy with her
winning smile. Joe Viterelli is amusing as her overweight Irish father,
and
actually pulls off a fairly convincing Irish accent. The sizzling hot
Brooke Burns makes a few appearances. And Jason Alexander is always a joy
to watch.

I think "Shallow Hal" does the best job at conveying the message that
beauty
is on the inside. It has been conveyed before in films like "The Nutty
Professor," but I feel this film conveyed it best. This could've easily
been a 105-minute fat joke, but it doesn't travel that route. There are no
crude or mean-spirited gags. Could it be that the Farrelly Brothers
matured? Even of the films of theirs that I liked (ex.: "Dumb and
Dumber,"
"There's Something About Mary") are a little uneven and contain a few gags
that are just plain cruel. Like in "Mary," Cameron Diaz's brother is
mentally ill and the butt of a few jokes. Here, we have a character that
walks on both his arms and legs, but he's portrayed as a normal character,
and not as a gimmick for some cheap laughs. There are moments that really
tugged at my heartstrings. The "burn victim" scene brought quite a few
tears to my eyes. The story is solid, with no boring lulls. And the
soundtrack is pretty good–I have criticized the Farrellys in the past for
using crappy music in their sountracks.

If you're looking for a good romantic/date movie with some good laughs and
a
good message, "Shallow Hal" will be an absolute delight.

TagsUSA
The One
Harry Potter and the Sorcerer's Stone