Shadow of the Vampire 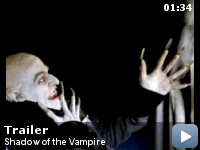 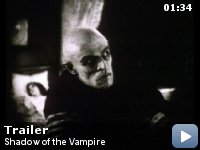 The filming of Nosferatu is hampered by the fact that the star is taking his role far more seriously than what seems humanly possible.

Storyline
Shadow of the Vampire is a film about the making of a German all time classic silent horror-movie from 1922 called Nosferatu-Eine Symphonie des Grauens (Nosferatu-a Symphony of Horror). The production of Nosferatu had to deal with a lot of strange things (some crew members disappeared, some died). This movie focuses on the difficult relationship between Murnau, the director, and Schreck, the lead actor.

Taglines:
An Unspeakable Horror. A Creative Genius. Captured For Eternity.

Cary Elwes has now starred in two film interpretations concerning Dracula, the other being
Dracula

Continuity:
When Murnau converses with Greta in the beginning, the length of her cigarette changes inconsistently from shot to shot.

Albin:
What is the most wondrous thing you ever saw?

Who Is The Real Monster?

F.W. Murnau's "Nosferatu" has always been one of my favorite horror movies,
mainly because it's one of the few that really seems to take itself
seriously. Often, even the best horror films, classics like "Psycho" and
"The Texas Chainsaw Massacre", include moments of leavening humor. Even
"The Exorcist" had Father Karras' film discussions with Detective
Kinderman.
Not "Nosferatu". This is a film that spends every moment of its running
time shuddering along with the audience in fright and disgust at its
beastly
vampire and the plague he visits upon the innocent people of Bremen. E.
Elias Merhige's intensely imaginative "Shadow of the Vampire" offers an
intriguing explanation of the film's creepy hold.


It's 1921, and Murnau (John Malkovich), a kinky martinet obsessed with
creating films as authentic as breathing, drags his crew to a moldering
castle in Czechoslovakia for the filming of his vampire epic. There, the
surprised crew meets Max Schreck (Willem Dafoe), the actor playing the
vampire, who, to say the least, has taken method to a new height. He is,
in
fact, a real vampire, who has made a bargain with Murnau. He will appear
in
the film, giving the director the realistic horror experience he so
desires,
if he is permitted to drink the blood of the leading lady in the final
scene. Murnau grows increasingly obsessed with feeding his muse while
Schreck settles for feeding himself, the body count mounting inexorably as
Murnau struggles to finish his masterpiece while his leading man is
finishing off the crew.

Steven Katz' script could likely have gotten by on its strikingly original
premise alone, but fortunately, he turned what could have just been a
corking black comedy into a surprisingly deep meditation on the dark power
of the movies and the sacrifices one is willing to make, of oneself and
others, in order to create art. Schreck is seen as a dessicated shambles,
the ultimate embodiment of an actor past his sell-by date still clinging to
his past glory, who, in a remarkable scene, talks about the sadness of
reading "Dracula" and seeing how thoroughly his special hell has been
misinterpreted and popularized. Of Of course, all the crew can say to this
is, "What an actor." To them, Schreck is just another old hambone who can
no longer distinguish fantasy from reality.

In one of the film's most poignant sequences, Schreck, who earlier
expressed
his yearning to once again see the light of the sun, watches film footage
of
a sunrise through a projector, staring right into the lens so the celluloid
sunlight can wash over his face. It's a beautiful visualization of the
powerful hold movies exert; everyone can remember memorable experiences
that
we've had through the motion picture camera, things we've done and places
we've been to that we could not have gotten to any other way. Just because
these experiences were only on film does not make them any less real to us.

Murnau, meanwhile, begins to emerge as the film's true monster, willing to
do whatever it takes to see his vision fulfilled, sacrificing his crew, his
cast, and his own humanity in the name of achieving immortality through
art.
Directors are often compared to God, and "Shadow of the Vampire" is one of
the most effective variations on that theme that I have come across.
Murnau, you see, is one of the old gods, and like those archaic deities, he
demands blood.

Merhige helms this material marvelously, conveying a sense of menace and
impending doom that make this a genuine horror film in addition to a clever
meditation on the form. The film, for its low budget, has the feel of a
true epic, with its castle looming up over the black hills, mossy
brown-and-green cinematography, and heavy, ominous music. The supporting
cast does a uniformly fine job, particularly Udo Kier, who invests
"Nosferatu"'s producer, Albin Grau, with unspoken secrets that exist only
behind his haunting eyes.

This film, however, is really a showcase for Malkovich and Dafoe, who
deliver two knockout performances. Malkovich is the perfect control-freak
director, calm and cajoling one moment, barking angry orders the next.
He's
even willing to shout down a bloodsucking beast if it will get him what he
wants for his film. Dafoe, buried under a ton of makeup, projects a real
character through his fangs and hissing, making Schreck pitiable, powerful,
and frightening all at once. Dafoe received a much deserved Oscar
nomination for his work here, and if Malkovich had been nominated as well,
you would have heard no complaints from me.

"Shadow of the Vampire" gets a bit muddled in its final act, when Murnau
finally confronts the vampire with his most powerful weapon. However, the
final moments are so powerful, the last shot so chilling when you consider
its implications, that the script's imperfections are subordinated by the
power of the film's message. "Shadow of the Vampire" is a provocative
picture that explores the depths to which creative people will sink, the
cost in lives and their own soul they are willing to pay, just for a taste
of immortality. One must beware. The taste is a lasting one. And
sometimes bitter.

TagsLuxembourg
The Tunnel
Head Over Heels