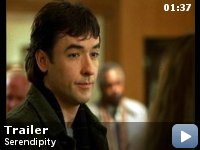 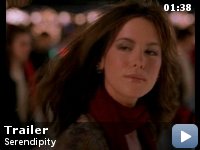 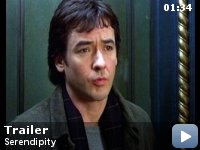 A couple reunite years after the night they first met, fell in love, and separated, convinced that one day they'd end up together.

Storyline
Jonathan Trager and Sara Thomas met while shopping for gloves in New York. Though buying for their respective lovers, the magic was right and a night of Christmas shopping turned into romance. Jon wanted to explore things further but Sara wasn't sure their love was meant to be. They decided to test fate by splitting up and seeing if destiny brought them back together… Many years later, having lost each other that night, both are engaged to be married. Still, neither can shake the need to give fate one last chance to reunite them. Jon enlists the help of his best man to track down the girl he can't forget starting at the store where they met. Sara asks her new age musician fiance for a break before the wedding and, with her best friend in tow, flies from California to New York hoping destiny will bring her soulmate back. Near-misses and classic Shakespearean confusion bring the…

Taglines:
The love of your life could be in line for popcorn…..

Continuity:
When Jonathan and Sara are in Serendipity the night they meet, their straws keep changing positions as they talk.

Eve:
[commenting on Sara's craziness]
They should make pills for this.

Cusack and Beckinsale Make It Work

Magic happens, if you let it; and sometimes even fate or destiny– or
whatever you want to call it– steps in to lend a hand. But when it
concerns love, and finding that special person you're going to spend the
rest of your life with, should you risk tempting fate with a test of that
love or what is seemingly meant to be, or should you just follow your
apparent destiny and embrace it? Such are the questions two people must
face and answer in the romantic comedy/drama `Serendipity,' directed by
Peter Chelsom. Jonathan Trager (John Cusack) is shopping for a gift for his
girlfriend, and Sara Thomas (Kate Beckinsale) is looking for something for
her boyfriend when they reach for the same pair of gloves on a rack at
Bloomingdales. And the wheels of fate are quickly turning. Or are they?
Jonathan and Sara proceed to spend the next few hours together, including a
romantic interlude skating in New York's Central Park, and there are
definite sparks flying between them. For Jonathan, it's a significant
emotional experience, and he realizes something has happened, that something
has changed in his life; Sara feels the same, but being a true believer in
destiny, she needs a sign that this is meant to be before she'll consider
pursuing whatever it is that's just happened between them. So she puts it
to the test. And for Jonathan, knowing only that her name is Sara, it's the
beginning of an odyssey– a quest– to find true love with the woman he
already knows in his heart of hearts that he wants to share his life with.
For Sara, it's the beginning of a search for love, and for that one special
person she knows is destined to be her soul mate forever. They both find,
however, that the path to pure love is filled with every obstacle the known
universe could possibly place in their way. And is the journey worth it?
Well, in the end, it all comes down to what fate has predetermined. Or does
it?


In the tradition of such films as `Sleepless In Seattle' and `You've Got
Mail,' Chelsom has fashioned a truly romantic tale of two people who are
absolutely destined to be together, no matter what. And– as the audience
knows early on– nothing less will be acceptable. Hanks and Ryan may be
missing, but the charismatic Cusack and the beguiling Beckinsale more than
make up for it, carving out their own niche in the genre with this outing,
and Chelsom has just enough of that Nora Ephron touch (including the use of
music, matching the perfect song with every situation) to make it work. The
chances of things ever happening in real life the way they do in this movie
are about twice as remote as winning the lottery, but who cares? This is a
heartwarming fable about love– about the way we `want' love to be– and
it's delivered with an endearing care that makes it emotionally involving,
entertaining and a thoroughly satisfying experience. And there's not a
whole lot more you can ask of a movie, I think.

Cusack is so likable, and manages to convey the bedevilment of his
situation with such facility, that the viewer is unequivocally drawn in from
the beginning. You want things to work out for this guy– and Sara, as
well; and, of course, you're pretty confident from the outset they are going
to. But along the way they make you feel something; they enable you to
share the frustration as well as the elation that comes with discovering
love, and perhaps finding that better part of yourself at the same time.
And the fact that Cusack makes Jonathan so believable, and someone with whom
you can identify, has more than a lot to do with it. It's a quality
performance from an actor with the flexibility and range to do just about
anything, and who never disappoints.

The other half of the equation for success, of course, belongs to
Beckinsale, who is not only beautiful, but a good actor who infuses her
character with a touch of mystery and complexity that makes her winsome and
interesting. Like Cusack's Jonathan, Sara is someone you can root for; you
want to see her get what she wants and what she deserves. This isn't a
perfect world we live in, and we all know it; but for Sara and Jonathan you
want it to be. There's a chemistry between the two of them, and they make
it so easy for you to project your own feelings and desires into their
situation, that there's no getting around it. If they win, you win. It's
that simple. And even though they take you over some rough spots along the
way, it's a fun trip and Beckinsale and Cusack– Sara and Jonathan– make it
a journey worth taking.

The supporting cast includes Molly Shannon, Jeremy Piven, Bridget Moynahan
and Eugene Levy (who is terrific– and hilarious– as a sales clerk at
Bloomingdales). A handsome film that touches all the right nerves and
pushes all the right buttons, `Serendipity' has a gentle sensibility about
it that addresses the notions of romance and love that reside within us all.
And it's refreshingly presented in a way that is pure and inoffensive; and
as such it allows you to open up and embrace something of value without
having to apologize for it, and without implying you have to be `hip' to
appreciate it. Because it's all about love and sharing love, which is
something we can all use a little more of in this world we live in today.
And that's the magic of the movies. I rate this one 9/10.