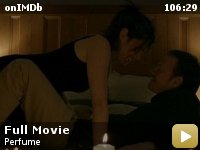 A week in the lives of a group of models, photographers, agents, reporters, publicists and other characters during a wild modeling show in New York City.

Storyline
'Perfume' chronicles one week in the lives of over a dozen people involved in the magazine and entertainment business of New York City. The central characters include Italian designer Lorenzo Mancini who learns that he's dying from cancer and decides to get his affairs in order with his wife Irine and his business partner Guido. Lorenzo's son Mario is a recording promoter who's latest client is hip-hop rapper J.B.. Roberta is a designer hard-pressed to fill out a latest dress design for the next Broadway show her group is putting on. Other characters are Jamie, a crafty agent whose latest client, Camille finds success but affects their relationship in ways he never planned and fails to deal with. Leese Hotton is a has-been model/actress trying to make a comeback into the spotlight; Janice Crawford is a wealthy publisher and control freak whose problems escalate with…

All the dialog was created by the actors.

Guido:
Were do you keep the batteries, if you don't mind me asking?

If you've ever been around "the fashion world," or grown up reading
"fashion magazines," you will understand EXACTLY what this film
portrays: "Life, Exactly As They Know It!"
The "choppiness" and "vagueness" objected to by other reviewers
is EXACTLY why this is such a great film, why this is such a "Real"
film: anyone who has ever been around "these people" will see
exactly how the dialogue mirrors "real life" in the fashion /
magazine biz.
The "one real scene" between Hemmingway and the
photographer (as described by another reviewer) is precisely
showing how rare and difficult a "real" moment is to find. In fact,
they are ALL "real scenes," wherein lies their power.
The scene where the daughter, (not "drug addled," by the way, as
described by another reviewer) who is the antithesis of "fashion,"
describes how reading magazines "makes her feel bad about
herself" and her mother's instant rejection and leaving of the
restaurant, is telling precisely the truth. And then any woman who
rejects "fashion standards" is left alone at the table.
The emptiness of the life and the constant ebb and flow of current,
changing tides, makes any real or lasting connection impossible.
This is even alluded to with Paul Sorvino in one discussion about
going to the hip-hop look: something to the effect of "in Europe,
classic can last… in America, you have to keep moving!"
Then the hip hop boys point out that the baggy-pants hip hop look
was born from poverty and "10 brothers and sisters, but the
suburban kids will follow" even at an unaffordable $150.00 a pop!
But that's the game!"
Until I saw this film, I never understood why I was not accepted –
could never connect with anyone in the "Fashion Crowd" when I
lived in Paris and New York. Now I know why. What was there to
connect to? People who "didn't want to be nothing" People who
made their living preying on others creativity and beauty, at the cost
of making everyone else feel like "less?" An industry that feeds on
people's insecurities and wanting to "fit in?"
I liked the daughter the best. She stood alone, sad and lost, but
stayed true to herself in the end and went on home, wherever that
might be.
There are so many profound statements in the dialogue of this film
that it would be worth printing every one of them here. Perhaps
some film buff / college student might write a dissertation on this
film alone.
Who sang the beautiful music with hip hop and opera combined? I
would love to have a music CD of the film, and am buying the DVD
just so I can "listen to the film" again and again.
Hope to see more. Thank you all! Great job!


TagsUSA
All the Pretty Horses
Traffic