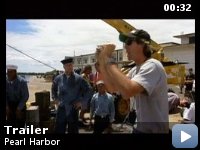 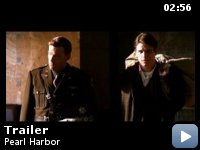 Pearl Harbor follows the story of two best friends, Rafe and Danny, and their love lives as they go off to join the war.

Storyline
Pearl Harbor is a classic tale of romance set during a war that complicates everything. It all starts when childhood friends Rafe and Danny become Army Air Corps pilots and meet Evelyn, a Navy nurse. Rafe falls head over heels and next thing you know Evelyn and Rafe are hooking up. Then Rafe volunteers to go fight in Britain and Evelyn and Danny get transferred to Pearl Harbor. While Rafe is off fighting everything gets completely whack and next thing you know everybody is in the middle of an air raid we now know as "Pearl Harbor."

Visual Effects supervisor Eric Brevig had to write an entirely new piece of software to create smoke plumes for the film as the amount of smoke needed was not allowed to be shot for environmental reasons.

Factual errors:
A Japanese gunner is seen firing a Browning machine gun during the attack. In reality, the Japanese rear gunners during the attack used the Type 92 LMG, a Japanese copy of the aircraft version of the Lewis Gun.

Danny:
Why the hell is the US Navy practicing this early on a Sunday morning?

Roll up, roll up! See the cinematic spectacle of 2001! See the horrible
deaths of 2500 or so people commemorated by a film about two guys who fly
fast planes really fast. See them go ZOOOOOOOOM, see them go WHIIIIZZZZ!
See them reprise the 'flypast and debriefing' scenes from Top Gun. Watch
the beautiful love story unfold. See the true love two people have for
one
another tested and broken when Kate Beckinsale comes between
them.

Watch the whole reality of war, and the lives and deaths therein
trivialised
to make a Big Dumb Action Movie that thinks it's some kind of ghastly
tribute to the American dead of December the 7th.

On the other hand, if you want an unrealistic film with ponderously paced
romance, fighter planes zooming all over the place and nice explosions,
check this out. It's a lot of fun. Just don't take it seriously – you'll
only encourage them!

TagsUSA
The Center of the World
Moulin Rouge!