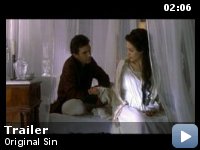 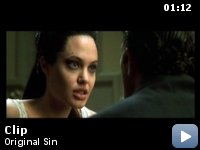 A young man is plunged into a life of subterfuge, deceit and mistaken identity in pursuit of a femme fatale whose heart is never quite within his grasp.

Storyline
When a man selects a mail order bride, he is surprised to see the beauty who appears before him. She alleges that she sent false photos to him to assure that he would love her for what she is and not for her beauty. However, what she is a con artist, prostitute, and actress, who teams with a fellow actor to steal money from men. What she does not expect is that she falls in love with her new husband and ultimately must decide between him and her sadistic former lover. Contains explicit sex including sadistic acts as Thomas Jane cuts Jolie's back with a knife as part of their lovemaking.

Taglines:
Lead Us Into Temptation

The title was changed to avoid confusion with Dancer in the Dark (2000).

Continuity:
Vargas puts the gun on the table before drinking the poisoned coffee, but the gun later reappears on his person when he shoots Billy.

Julia:
You cannot walk away from love. That was the advertisement in a Baltimore newspaper. And that is how he found her.

If truly watched, you cannot walk away from loving this gem!


Usually I rely on the voting averages to give me an idea of how good a
movie is. I have to admit that a 5.6 rating is much different from what
I would give this film.

"Original Sin" seemed to be the movie that everyone walked away from.
The only thing I remember about its opening was all the chatter about
the nude scenes. I guess it reminded a lot of viewers about the whole
"Wild Orchid"/"Showgirls" fiasco which is still etched in the
mind's-eye of every self-conscious moviegoer. Perhaps this apparent
smoke screen of an issue caused Angelina Jolie's (often chapped and
super-pouty) lips to be sealed regarding her role in the movie.
Likewise, the dependably silent/aloof Antonio Banderas was even harder
to locate when it came to any promotion of the film. And after making
sure every radio listener heard, "The Music of My Heart," even the
inconspicuously conspicuous Estefans forgot to drop the hint that they
contributed to the film's lushly romantic score.

The fact that this was not a perfect movie didn't prevent it from being
an excellent one. I think the film's real problem was that it couldn't
quite fit into the typical Hollywood hype machine that has crowned more
inferior material with non-stop publicity and gratuitously "glowing"
reviews. It could also be due to the fact that the plot, "not a
love-story, but a story about love," didn't match the small space many
viewers have reserved in their hearts for Romance and Drama – just not
both!

Anyone who takes the time to TRULY WATCH THIS MOVIE will find that they
cannot walk away from loving it. Banderas and Jolie succeed in being
both glamorous and gritty. Antonio Banderas is one of the most
beguiling actors in contemporary cinema (believe it or not). I am
always amazed by the vast artistic depth that lays beneath the
stereotypical Latin-lover super-bronzed matinée-idol exterior that he
has been assigned to. Banderas' talents, like this movie, are grossly
underrated and marginally explored. His every motion gives Vargas the
pitch-perfect blend of simplicity and passion. Banderas' portrayal
makes it hard not to hurt when Vargas hurts or trust when he trusts.
This makes it easy to see why the naive Vargas and the lethal
Julia/Bonnie are integrally compatible.

Wacko Jacko antics aside, Jolie, in all her un-Gwynnethness, is a site
to have and behold. As the mysterious Julia, she is one mail-order
bride who can both sell her body and steal a man's soul. Jolie succeeds
in revealing every aspect of Bonnie's internal struggle to achieve
personal authenticity while accepting a once-in-a-lifetime chance at
true intimacy.

In many ways, the film is about humankind's universal need to be, "who
we truly are" as well as the long, winding and often treacherous road
toward love's salvation (closely examine the play Julia & Vargas went
to see). The movie's many twists and turns represent the bloody
sacrifices/transgressions that often mark the way. This was constantly
echoed through a script which foreshadowed the story's theme (in a
manner both poetic and hypnotic). Equally intoxicating were the use of
nontraditional cinematography and sound techniques. They perfectly
complemented the period-heavy scenery and costume. All these elements
melded to create a picture that was at once abundantly sensual,
visually stunning and emotionally sensitive – with an excellent ending!

Oh, and as for the much talked about "skin scenes". I thought they were
well done. Gratuitous, yes. Gratifying – definitely! If you've got it,
flaunt it. Banderas and Jolie absolutely have it, and then-some!